We have seen an increasing escalation of difficulty for Job Quest Instances. Of course, for Shadowbringers, there are just too many “Jobs” to have a train of Job Quests for each job, so the designers have given us “Role” quests. 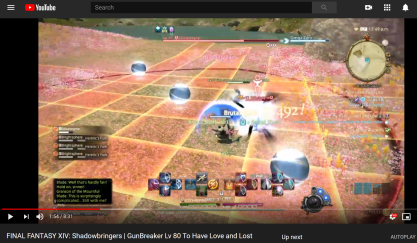 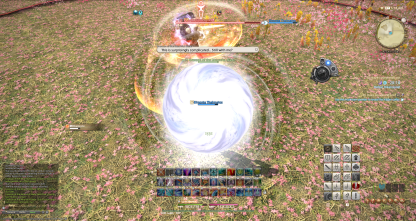 Well, the instances for these are way over the top. I’m not interested in learning to RAID. I spent an evening watching the Eden’s Gate (Savage) Raid on Twitch. I’m no expert, but the whole fight was about a dozen failures, one after another, as one or another member messed some fiddly bit of mechanics by being off by a foot length and causing a wipe. And the whole fight was one Boss on a platform.

I like the design of the MSQ dungeons. Near the end of Shadowbringers, Mt Gulg is a nice dungeon. and I’ve done it a few times with a Red Mage. It’s a little fiddly at the end, and the Boss animations can cover the Trust members that you need to follow to avoid the hits that are not well Telegraphed. But I’ve made it through several times.

But the Role Instances are a whole other thing.

The Job / Role quest instances are apparently being designed by the same folks that do the Raid Bosses. I don’t care that the Raid Bosses are hard. Like I said, I personally think that kind of content is extremely boring. Unlike Hunts and Fates, and End Game dungeons and a ton of other high end content for each expansion, which are not boring at all. But a single platform with a single Boss, and a pile of fiddly mechanics any one of which will cause a wipe just makes my eyes bleed.

But either make the Job / Role instances more reasonable, or rewrite the jobs to give me those BOSS skills that the opponents are using. How about we get a Tank Role skill called “Silver Balls All Over the Area”? Or, “You Better Stack Up Or You Are Gonna Die” skill. I could use those skills to hunt elites and boy would those skills make PVP interesting.

I didn’t go into this blind. I watched the Youtube guides, and then after failing with 405 level gear, I spent literally 1.5ish million Gil on the Market Place on new gear to push it up to almost 450. I tied to Grind Trust Dungeons to get gear, but the RNG gods were not with me. I kept getting gear I already had for other jobs, with only a few drops that I could use. Besides, those drops were only level 420 or something.

But I still had to do the instance 3 times before I got it right. And I failed twice on the level 78 instance. The second time I failed on the level 80 instance, the boss and my companion were both dead at the end. But the instance still failed. Guess I missed it by milliseconds.

Notice that after you fail, you get a choice for doing it “Very Easy”, which I always select. Who wouldn’t? These role instances are only mildly interesting.

The only way I succeeded was to heal Granson twice during the fight with Aurora. I’m a Gunbreaker remember not a healer. I was never in danger during the fight, but apparently the instance is designed so that, as a Tank Role, you need to heal your companion. And yes I enabled the tank Aggro skill, although it did not show or apparently do anything during the fight. Hey, it’s ok to require the use of a role or job skill during the fight to complete it. That’s call “A Lesson”. But in all the finger bleeding mechanics avoidance, it’s hard to get a lesson.

Look, I don’t care if folks like to learn to do Extreme Dungeons and Raids. Or that they are in the game. Unlike Tera, where that is all there is to do at the End Game, FFXIV has a lot to do at End Game.

Update: I see a solution here after some research.

I take issue with the increasing difficulty Gating reaching End Game, as if I need these skills to continue to play the game. Seriously, OVER 2 MILLION FREAKING GIL to buy gear to complete one job to the end game. And there are another Dozen Jobs to go? And each one has to go through this level of Instance? Not to mention that I have 15 ALTS.

But these prices seem excessive, don’t they? Especially given the number of jobs in the game. This is the “Gateway Gear” to the end game. You need to start with this gear if you are going on to End Game Dungeons and Raids. All other gear I’ve seen, before the End Game Dungeon drops are less capable than this gear. So this is the 2.5M gil stepping stone gear to the End Game.

Who Knew – Facet Gear is Crafted 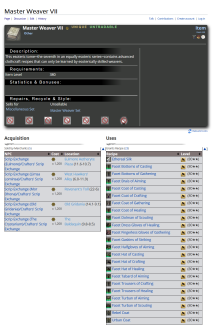 I have hidden the name of the seller above on the website since I am pretty sure that selling in-game items for real currency is against the terms of service of the game. Soooo. But this tells me that my plan should be to level a set of professions required to create this armor on one of my characters, and then work out a way to transfer the items reliably to my other toons as they need them. I can use a friend, for whom I also make gear.

Transferring gear privately between characters in the game is not against any terms of service. It is just that it is not possible to transfer items directly between two toons on the same account. This is unlike all other MMO games that I’ve played. In all other games I’ve played, either Mail works between toons on your account, or there is a shared bank to share items. Sharing among toons is expected in other games. But in FFXIV, sharing is not “Prevented” or “Outlawed”, it is only made very inconvenient.

Here Is The Plan

Then I’ll make some friends, who may want gear for their jobs, and they can help me pass gear between my toons. Now that FFXIV has World Visiting or Wandering, this should be no problem. Without wandering, it would be a major problem since my toons are scattered across about five servers.

What Level Are My Alts?

Most of my toons or Alts are into the Heavensward expansion, and many have completed it. Two have completed Stormblood and one is near the end of Shadowbringers.

Now that I’ve solved the Gear problem, the only annoyance left is the Job Role Instance difficulties. I don’t mind things getting a little more complicated as the expansions pass, but things are getting pretty ridiculous with Role Job Instances with Shadowbringers. I’m not a noob in this game. I have some skills here. And Powerful Gear will help.

Just tone it down, SQEX, I don’t want to learn to RAID Solo just to get to End Game. The Exponential Power Curve for FFXIV has a pretty low coefficient, unlike previous games like Wow, Tera, and the early Dekaron which have very high coefficients of exponential power per level. No need to amp up the difficulty of Solo Instances so much.