Halloween is a really big deal in Guild Wars. For about two weeks, All Hallows Eve breaks lose all over Guild Wars, but especially in Lion’s Arch. This area is controlled by the White Mantle, but is in the center of an area where the surrounding forests and swamps are controlled by the undead.

The town of Lion’s Arch, and the outpost of Droknar’s Forge, among other places possibly, are transformed during Halloween in many different ways.

During the season, killing monsters often results in the drops of Trick or Treat bags, which contain interesting treats.

One of the popular items given out every year is a festival hat. In prior years it was a Jack-O-Lantern hat.

Another popular activity is streaking – removing your armor and parading around in your underwear.

Droknar’s Forge is decorated in a seasonal mood as well. 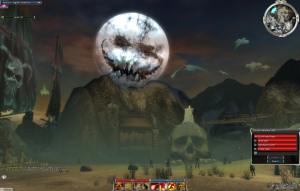 Starting at midnight pacific time of Halloween, Mad King Thorn appears at Lion’s Arch every three hours on the hour. 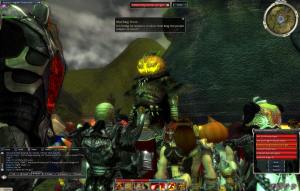 He engages the party goers in a series of tests and each test you get right does not kill you – for about 10 seconds after which you are revived – and treats you with a trick-or-treat bag.

The tests are of several types:

The whole process goes on long enough that I was able to get about twenty trick or treat bags and I only was able to type the right thing about eighty percent of the time. There are timing and lag issues with some of the commands.

Here are the treats from the trick or treat bags.

This is this years hat, the Zombie Mask. 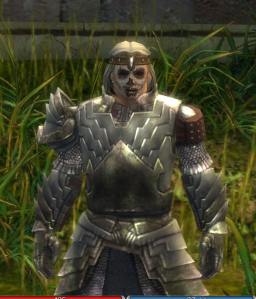