In about three weeks of life, I, Windy Flayer have reached the august community of Level 20 characters. I have gone from a lowly apprentice Warrior in Pre-Searing Ascalon, to a member of a team who successfully negotiated the Villainy of Galrath Quest for a whopping 4000 xp – experience points. This single quest what put me over the top, from a mid-level 19 to a solid level 20.

As you may recall from reading about my previous exploits in the Frost Gate campaign, after that quest I was a lowly level 12, with much yet to learn and experience. Shortly after that quest, I met a powerful and generous fellow, a Dervish / Monk named Super Chin Whisk, who financed my run to Drok’s, or Droknar’s Forge. It is nearly impossible to actually fight one’s way to Drok’s, but once one reaches there, one finds two armorers. I chose Seifred, who built me some very powerful, and very handsome, Templar armor. The armor from Drok’s is sought after because of it’s strength, Armor 80 +20 against damage. This is the most powerful armor available in any of the Guild lands. The trip to Drok’s and the armor is very expensive. But my friend helped with almost all the costs.

To get to Droks, one pays a runner. The trip is very expensive, 2K Gold, or 2 Platinum, which at the time seemed out of reach. After what seemed like an eternity of fighting foes and collecting every scrap and every coin, I had only 3K in the Xunlai guild bank. My research had also indicated that each piece of armor would cost 1K. My friend bankrolled the trip and the remaining cost and materials for the armor. I am forever grateful.

Let me describe this process of “running” because on the face of it, it looks quite underhanded. My judgment is that this running is an unintended consequence of the design of our world. As it turns out, if a party traverses a quest, but one or more of the party dies along the way, and one of the party makes it to the next boundary crossing, then all members are resurrected at the next boundary or final destination. While this is a reasonable tactic for normal quests, in this case it is exploited for profit by runners and by those who need something valuable without fighting for it. The party members pay a runner usually a Dervish with powerful armor and high speed, to run the path to a sought after place. Those members die quickly along the way, but they are resurrected, in the case of the run to Drok’s, three times along the way, until they reach their destination. Once at the destination, it is possible to return at any time by the mapping, or teleporting. 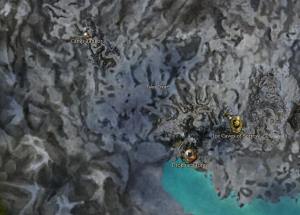 There are apparently at least two instances where runners are paid to avoid quests: Droknar’s Forge, and quests in Eye of the North and other campaigns to obtain Heroes. But I will leave the complex tale of heroes for another time when I have achieved them.

After Drok’s, I had my powerful armor and so could face more powerful foes. The 80+20 armor does not make one invincible. It is still quite easy to be killed when a group of foes or monsters attack all at once, but the armor makes attacking stronger foes, if done carefully, much more successful.

Over the period of about a week I was able to progress west across Tyria through the sage lands and the Maguuma Jungle. I met and vanquished the undead and the Knights of the White Mantle. In this world, we are not working for one side or another, we are true mercenaries, alternately working for and against groups like the White Mantle, who are a group of religious zealots, who fight the undead, but also sacrifice members of their foes, the Shining Blade.

There were two quests that would allow me to advance toward my goal of level 20:

Clearly when quests granted such large numbers of points, they were very difficult. I would need help. I asked a recent friend, Shadow Blood Ranger, to help and we and his heroes polished off Blood and Smoke. We then went back to Lion’s Arch to get the Villainy quest, and found a very accomplished warrior named Tuo Kconk to help us. She had done the Villainy quest several times before and lead us flawlessly.

About 80% through the quest, after over an hour of winding our way through forest, glades and smelly swamps, killing hundreds of monsters, my system crashed with the BSOD. As it turns out, Guild Wars is very robust and this was the first time that the system or program had showed any problems in almost three weeks of game play. Well after a reboot and signing on to Guild Wars, it asked if I wanted to re-join the quest and lo, my friends were waiting on me and we kept going and completed the quest, and I became a level 20 character.

When I was a level 12 character, level 20 seemed very far away and the cost of 2K gold for the Drok’s run and 5K for the armor seemed very expensive. Now as a level 19 and 20, each long quest brings about 500g or more and my bank has plenty of money to bankroll other of my characters through Drok’s and other places to get their armor. I am saving all my loot including weapons for my other characters or to share, identifying items to make them more valuable, and salvaging materials for armor and to share with others.

Unlike Second Life, there is no way to bring real currency into this game to make up for not having skills and hard work to buy what you need. You must earn everything with hard work and the help of others.