Ok. I’ve been playing Legion for a week or so. Time for some gripes.

It’s too hard. My fingers are bleeding here. Let’s look at some history. I first joined Wow back in Cataclysm days and being an Altaholic, I had a few toons up through the 80’s through Vashj’ir and Deepholm. I wasn’t into dungeons much, so I was wearing mostly quest gear and some crafted pieces. I was doing fine. The game was fun.

Then came Pandaria, and I got trashed. Why was that? There was a sudden item level jump between the quest gear of Cata and Pandy. And the gear they gave you on the Pandy Intro quests looked way better than Cata quest gear, but it was really just trash. So you step off the boat and get trashed by the 3 Hosen that jump you. I couldn’t move out of the outposts. Pandaria was just NO FUN. I never found out whether I should have ground up some dungeons for gear or whether I had to be a serious raider – never had done one back then – to get reasonable gear for Pandaria.

I’m back in Wow. Got bored with Guild Wars 2, went back to Guild Wars 1, and Tera changed the Guild Banks so foo on them. Details in other posts here on this blog.

Pandaria has changed. With Heirlooms the gear is fine and I’ve taken a few toons, in both factions, into Pandaria and kicked Hosen butt. What happened? It’s not just Heirlooms. They have changed it. Maybe as part of the big squish or maybe something else. 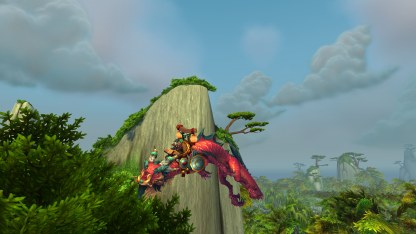 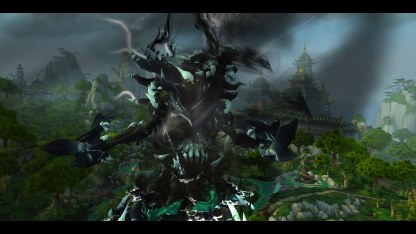 Pandaria has lots of good replay value now. No knuckle bleeding, no cursing, just good story for all classes. Great.

Turns out GW2 had the same trouble with Heart of Thorns. Let me tell you why.

Let’s review what happened back in 2015 when HoT was released. The Maguuma Forest is a real pain. I had crafted Exotic Gear. The very best gear in the game is only 7% better than this crafted gear. Really fine armor and weapons are easily crafted in GW2, and I had it. But HoT was a pain. If you go there alone, you get trashed by every mob you pass. The aggro radius is way too high. If you didn’t stay with a Zerg – a large lose group of folks running through an area killing stuff and doing the random spawned events – sort of like Wow Bonus events except they happen all the time and are repeatable as many times as you want. If you stay with a large group, then you are fine. But if you get separated – and you do at first because you don’t have your glider skills yet, then you get trashed as soon as you are alone.

Well they fixed that. I’m not sure what they did. Reduce Aggro Radius on all the mobs? Reduce the “ilvl” of the mobs? I don’t know. But I’ve gone back with the same toons with the same gear and made it fine. Since you have to be Max Level of 80 just to go there, it’s not like anything else changed but the Jungle. I think GW2 learned. Things can’t be too hard if you want replay value.

Well, it appears that Blizzard has not learned that. Pandaria was too hard, and it got fixed. Maybe by accident. Draenor is ok. I was not there for the launch, so I don’t know if they fixed it, or whether Heirlooms or something else fixed it. But Legion is not fixed. My fingers are bleeding from playing this morning on my Demon Hunter from 105 to 106 in Azsuna. I tried Stormheim yesterday and after an hour or so I bailed out and whet to Azsuna. I thought these zones were supposed to Auto Level. What happened to that?

I was an early GW2 player. As it turns out GW2 has auto leveled your toon to the zone from the beginning. An experienced player does not need to level a toon from 1 > 80 usually since on your birthday and other times you get Scrolls that buff a toon and soon you have enough to level a toon to 80 without playing. But if you go back to low level areas, you are down-leveled, but get rewards appropriate to your actual level. Great. But when they started the game, they did it wrong. So you got trashed. Then they realized that more than one mob was going to attack at once, so they made Auto Level mean Zone Level + 3 – or there abouts. And now all is fine. Blizzard has not learned this or ignores this. So playing Legion is Knuckle Bleeding Hard. So this reduced replay value. I’m not going to bring three dozen toons through an area where my knuckles bleed for each one. Just not going to happen.

Guess I’ll go back to grinding Dungeons to level to 110. I did a dungeon yesterday and it was great. Except that the loot was Crap! We too down Odyn [sic on the spelling btw] and the rest of the dungeon too. But I got nothing. Nothing useful. What’s up with that? Why after all that work should I get nothing of value. And the XP wasn’t that great either. Like they don’t want to actually make it worth my while to do a Legion Dungeon? Again. Trashing my replay value.

Now for Garrisons and Order Halls

I have no interest in building up lots of garrisons with my alts. Been there, done that to get to the place where I can grind rep to finish Draenor Pathfinder. But just what use is a fleet of ships? Can I assault the Broken Isles with that? Oh wait. That’s right, Wrong Planet, and Wrong Time BY A THOUSAND YEARS or some such. How about I take the ships through a portal and attack the broken isles. After all, we took Dalaran to the Broken Isles and got to Draenor in the first place. Should be a piece of Fish Cake, or whatever you like.

How about we enhance Garrisons, and Order Halls, for better replay?

Actually allow “Followers” to follow. They can tank or heal, your choice. Limit one? Or if you are doing a dungeon. Allow you to build a party of them and do a dungeon. Guild Wars 1 did this. They called them Mercenaries and the GW1 servers are still running. I was back there earlier this year and things are fine.

Make it easier to find your followers in the Garrison. I spent 20 minutes looking for one  and had to look up the 5 places on Wowhead where they hang out. How about a Shout to find them. /Follower name or something in chat and they come running to you.

Actually make it worth your while to level these folks. If they could help you do stuff outside the garrison, then I would care if they were a higher level.

Remove the stupid limit of 20. They used to limit hunter’s pets to some little number. Now there are a bunch more slots. Why aren’t followers like pets. Collect them all and get an achievement. Just limit the number of active missions, which is apparently what this is trying to limit. And what is this 250G gold sink to reactivate a follower? They are not useful anyway so why would I burn gold to bring them back? I just stopped collecting them when I ran into that limit.

What’s the replay value for having followers? Get me any good mounts or stuff with replay value beyond Draenor? Nope.

How about this for replay value? Make Garrisons optionally ACCOUNT/ Faction Wide. That is, when I show up in Draenor, I choose to connect with my account garrison and the followers are there, the buildings are there and they say, “Welcome, Commander. We hear that you are taking over from our previous commander. How can we help you?”. You can play it the old way if you want to, or not. Your choice. Continue to build up your garrison from where the previous toon left off. Same with the Navy. You still have to rescue / recruit your ship wright, but from there on, you are starting where you left off. 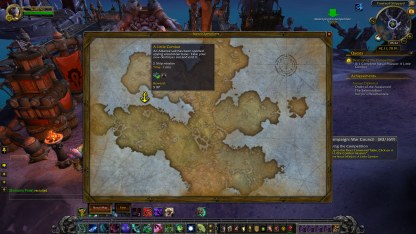 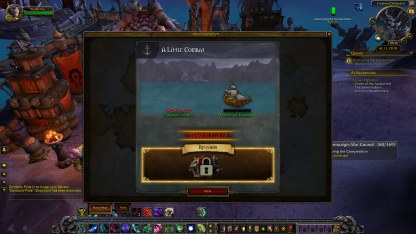 Same thing. At this point what is the point of enhancing the Order Hall? Doesn’t help me level as far as I can see. Followers don’t follow. Why should I build up a bunch of stuff in a “Shared Hall”. At least the Garrison was an instance, sort of. The outpost Garrisons, or whatever they were called were sort of shared. I made a choice about how to build them, but was never clear on how they worked. What if you are in a party when you chose a lumber mill and your friend chose an Arcane What’zit for theirs. And you stand beside each other in the outpost. What do you see? His? Yours? The Party Leaders? Each your own? Very strange. Same problem with Order Hall enhancements. In a shared space what do “enhancements” mean and why add that choice and complexity to the game? What’s the replay value? Not clear.

Oh. Here’s the embarrassing question of the year. What happens to Avatar Weapons in the next Campaign? Some new thing? Just drop them in the trash? Or use their look in Transmog for a Retro look? Or do we get page 2 of the interface and continue to upgrade them. But how do we get back to the stupid machine to do it? At least the Death Knights had a good scheme with the Death Gate to get back to the Rune Forge. I think all the classes should have had the Order Gate to get to and from the Order Hall. The point is that in the next campaign, going back to Dalaran is going to be a waste of time. I guess the whole Order Hall thing is toast too. Sad.

Well that’s enough gripes for now. Back to playing some toons into / through Pandaria getting ready for Draenor. I’ve done my Tanaan Rep Dailies for today, so I’ll need to do something else until tomorrow. Boy those Sabercats are hard to kill. Even for a 106 Demon Hunter.