It’s been a while since I’ve played anything but the “Starter” which I check out every few months. But I’ve decided to Re-Up my subscription and get back into it. After all, with no upgrade I can go as far as Warlords now. My highest toon is 87, so there’s a long way to climb to hit the top of Warlords.

Things have changed, mostly for the better.

Going Back and Kicking Butt

Well, unlike Guild Wars 2, when you go back to previous content, Wow does not “down-level” so you kick serious butt. Even with the “Squish” that happened with Warlords, if you are five or so levels above the content, you trash it with one shot.

I took a 87 Death Knight to a level 50, 40 person raid called “Molten Core” and seriously kicked butt. At least I thought it popped up a message saying 40 person. And the badge at the top right of the images says 40. I thought I was farming some mats for leatherworking, but turned out that was Blackrock Depths. I found a better place to farm Thick Leather. The only leather in “Molten Core” was “Core Leather”. I’ll have to look that up and see what it’s good for.

Farming mats in dungeons is not the way to go. I had much better luck in open world areas. Only a few times did a run across other players working the same area. There are still new players out there leveling, or older ones leveling alts. Sometimes you can tell the difference. Someone with a fancy mount or an heirloom is a longtime player.

Classes Have Been Re-balanced

With Warlords, as I recall, the classes were overhauled and re-balanced.  I find that the new Insanity Priest build is powerful, but not so good a healer, or I need some better practice. But it solos very well. Unlike the older classes in Tera, Wow re-balances their classes often and makes sure that they play well solo as well as in groups. 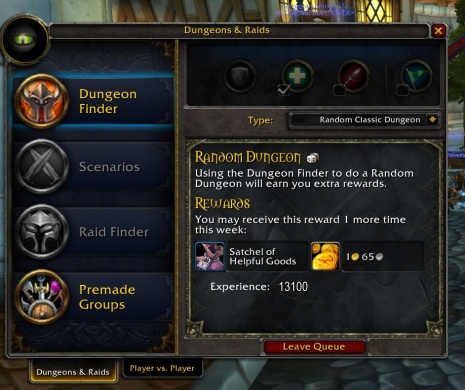 And unlike Tera, the dungeon finder worked very well and I didn’t have to wait very long. Of course I am a healer. I’ll sharpen up my skills, use a “Holy” spec and try again soon.

Hunter is very powerful, and with a new Trailblazer talent, you run 30% faster when out of combat. This is great for farming since you don’t have to mount / dismount all the time. Also it looks like there are some new pets. Petopia has not been keeping up. These are not in the list.

In a corner of Duskwallow Marsh, I found a large beetle named Roth Salam and in a cave I found a cave spider that you normally don’t see until you go to Deepholm at level 85 or so. I ran Razorfen  Kraul for some mats and found some Spirit Boars that stay that way after you tame them. None of these critters are in Petopia.

I know that I look extremely dorky. I’m farming mats and leveling my Leather Working to make some sweet armor.

I’ve played a 32 Shaman for a few minutes and found that totems are less important and that she can do some serious damage. More later on that class.

The bank now has a section for materials.

For low level toons, 100G is pricey. But for folks above 60 it’s not burdensome, and if you have a high level toon that can front you the cash, you can have it right away. Unlike Guild Wars 2, where each mat has it’s own named slot, here the slots are unnamed. I guess there are just too many types of mats in Wow to make naming them reasonable. The “Deposit all Reagents” button pulls stuff out of your bags and other bank bags and there is a sort for the reagents panel that puts it all neat and tidy. Most mats stack to 200 so the bank and bag space goes much further than it did when things only stacked to 20. Given each toon has it’s own bank and reagent panel, there is a lot more bank space in Wow than in GW2. The more toons you have the more space you  have. As long as you keep your toons on the same realm. You still can’t mail items between realms, oddly.

Back in 2011 when I started playing Wow, most of the realms said Medium or Full, and only a few at the top were Low or “New Players”. We have heard rumors of the population crash in Wow. Blizzard stopped making the data available after the big crash. Speculation at some of the magazines puts the population of active players at about 5.6M down from 12M at it’s peak. Quite a fall. Well it seems to me that the realm list shows this too.

The image on the right is the entire list and you can see that almost all of it is “Low”. Since players are combined in the game from different realms, and if they are from a different realm you see (*) after their name, it’s impossible to tell what the real game population is. Stormwind and Orgrimmar town squares are still quite busy, but that tells you nothing about the player population. I’ll know better after I play some more dungeons with DPS classes. Tera’s population is way way down except for new class events as happened last month. Low and Mid level dungeons are almost unplayable and the Matching never works unless you are a healer. We’ll see about Wow.

Back in the day I used a plugin that lead me from quest to quest to level up. I’ve not checked back with that. Not sure it’s that useful since I mostly know my way around and the quests are linked in chains. I do use TomTom to point to what needs doing.

But Wow has added an Adventuring Guide to the menu bar. Unsure about where to go next, it looks pretty useful. 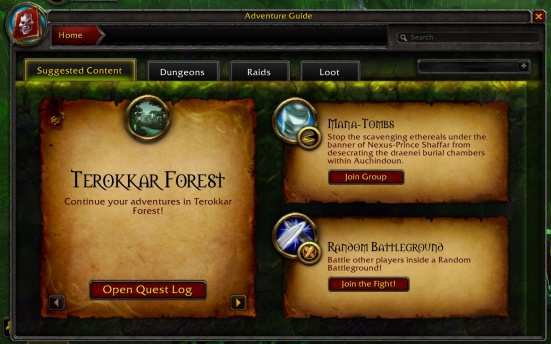 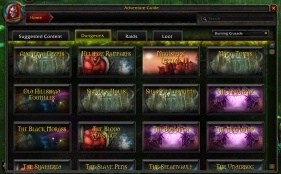 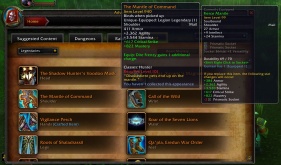 But one strange thing about it. When you look at the Loot tab, it only shows level 110 stuff, not the stuff that’s useful at your level and where to find it. So that panel is pretty much a waste. It doesn’t even realize that I don’t have “Legion” and so am level capped at 100. But the rest of the panel looks very useful.

I would not have expected bugs in transport in the game. The Alliance boats always worked, but oddly, Zeppelins sometimes never arrived in Orgrimmar. The NPC kept announcing them, but they never showed up. I had to fly or portal out somewhere else and travel from there.  Chat with other players indicated that this has been occurring frequently recently. Odd. They are doing maintenance as I write this, so maybe it’s being fixed.