When I logged into after the last update, a new quest appeared for my 65 level characters: Memory Lost. What’s that. It says you get a Dreadnaught Weapon. That sounds good. Do they just give it to you, or do you have to do something impossible to get it? 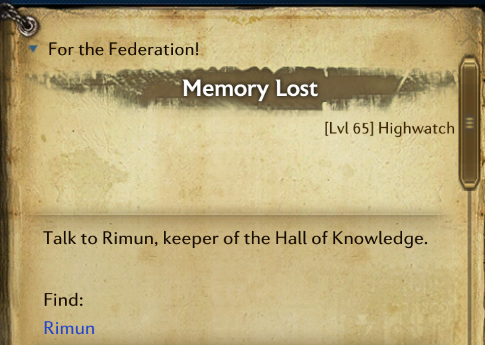 Well let’s give it a try. On a brawler so I don’t embarrass myself.

I’m not going to give the whole story line here, but just enough info for you to decide whether you want to do it, and can complete it.

The quest starts out as a solo instance and you have 3 companions. You are walked through a story and meet an ominous character, and a series of fights. These are pretty tough, and get tougher. The companions only help in the first fight. After that they stand around outside. If you are Archer or Sorcerer, I suggest that you better be stronger than a noob 65 with Idoneal gear. Regardless, as a noob 65 Brawler it required a couple of valiant potions to heal during the fights.

There’s a cut scene at the end. I have a feeling that this is Dakuryon and his ascent to power, but I’m not sure. This is supposed to be recovery of lost memories.

Unless you are a dungeon Wonk and want to grind all the dungeons for the best gear, then don’t bother with this. Personally, I’m done with this game, for each character after I get Idoneal gear. I used to grind the Rep for the Panther mount on some toons, but since that Panther does not fly, there’s no point in that anymore.

This is a tough fight, even for a brawler. So if you want to do it, I’d grind dungeons to get level 5,6 gear at least, to be ready for the Level 8 Dreadnaught weapon. Also, they give you some stuff to enchant the weapon, but it only gets it to level 4, and unless you are going to grind dungeons, you won’t have enough to take it further. This is a bust for me since I’m not a dungeon grinder. Sadly, Tera is only designing content for PVP and Dungeon grinding beyond level 65.