I recently became aware of a method of fighting in dungeons that seemed quite surprising. Apparently some folks equip Slayer crystals in dungeons in an effort to up their Crit stat. These crystals only increase crit however, when your HP is below 50%. This causes some very strange behavior :

I decided to do a test to see if Slayer Crystals had more benefit than the obvious other choice of Pounding Crystals which have recently been added to the game. I’ve done this test and recorded the video. The video and a PDF file of the data analysis spreadsheet are available for your review.

Bottom Line: Slayer Crystals, under the conditions of this test, appear to be about 20% better than Pounding Crystals. But the difficulty of keeping your health below 50%, and the issue of not being able to use healers, would seem to outweigh this advantage.

This entire video is provided without editing so that the analysis can be repeated. The entire test took about 12 minutes. Two no-crystal kills, three Fine Pounding kills and four Fine Slaying kills were analyzed. 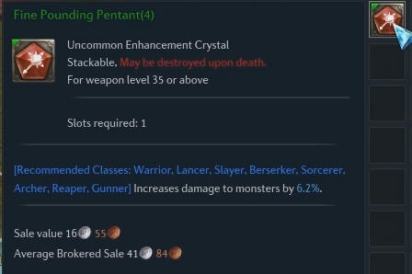 These are the crystals used in the test.

Here is the PDF file of the analysis of the test.

Personally, I’m not convinced that the Slayer crystals provide enough additional benefit that it is worth the additional trouble and risk to operate at 50% health during a dungeon. I recall however, when recently doing a dungeon – Saleron’s Sky Castle at level 56 – that the Lancer kept his health at 50%. I was surprised at the time that the Lancer did not appear to be worried about this level of health.

I have also been surprised that these crystals work at all in the presence of Avatar Weapons. The benefit of Avatar weapons is that they increase the crit level for mobs of about the same level as the user. I  had assumed that the Avatar weapon effect would swamp any effect of the Slayer Crystals, but the test shows that there is an additional 20% benefit of using the Slayer Crystals.

Your mileage and experience may vary. I encourage you to do your own test for cases that you care about. This test methodology is easy enough to employ for any test case.