You recall my previous post about using LibreOffice Impress to show artwork?

Well that’s a problem if you have lots of artwork you want to show. The slide shows get very large and so you have a few shows, and then you want to loop them all, right? Impress does not support that. So I wrote a program to help.

QtShowRunner runs a sequence of LibreOffice Impress slide shows one after the other in a loop. Currently it runs on Windows but soon the plan is to move it to Linux Mint.

See my original question about this problem here:

After no solution appeared, I wrote a program to do it. 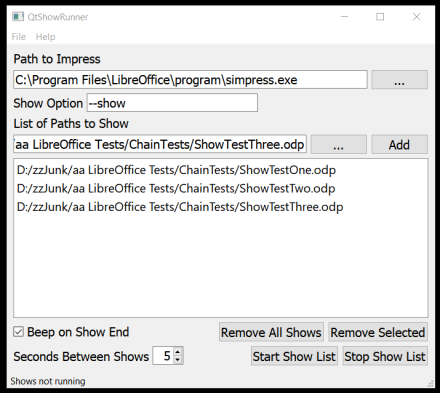 Here is a shot of the program dialog and the Impress Slide Show settings. You need to uncheck Change Slides by Clicking on background for QtShowRunner to work without skipping through your slides.

Here is the SourceForge page for the program.

Here’s a Youtube video of a short test of the program:

Must Build From Source Now

Unfortunately, currently all I can share is the source, which means that you need to build it with Qt. And also run it with Qt since the Qt DLLs are not available to the program unless you run it with the QtCreator. I’ll work on solving that problem soon.

Go here for the Qt environment and scroll down to use the Open Source aka Free version. My software qualifies since it’s Open Source.

Some Issues, but Not Repeatable

A couple of times, Impress crashed. But it has not happened again.

I started this process by doing screen shots looking for the “black screen” at the end of a slide show. Of course it’s not completely black. And the system I was using – with an Nvidia card – had some background left over on the left side of the screen. But I got that working on the system with an Nvidia 2060 card. But then…

I moved the application to a GByte Brix mini-pc system and it failed. That system has a low-end Intel CPU with Integrated Graphics. Turns out the screenshots the program was getting were of the application, not the slide show, so they never went black. Total FAIL.

So now the QtShowRunner program just clicks the mouse all the time the show is running and watches for the program to exit. This works on both the Nvidia and GBrix system.

Ok. Back to work on the Linux Version, and then figure out how to “Deploy” for windows.