As some toons reached about 70, I created Cloth and Mail armor with crafting. There are several problems to be solved:

It turns out that the Wow crafting panel has a search feature, and if you choose “unlearned” then you can search for recipes that you don’t know.

Then you’ll want see if they look good enough to make. And find out quickly what ingredients are required. So use WowHead to help make a Google Spreadsheet. Searching on Wowhead brings up the following: 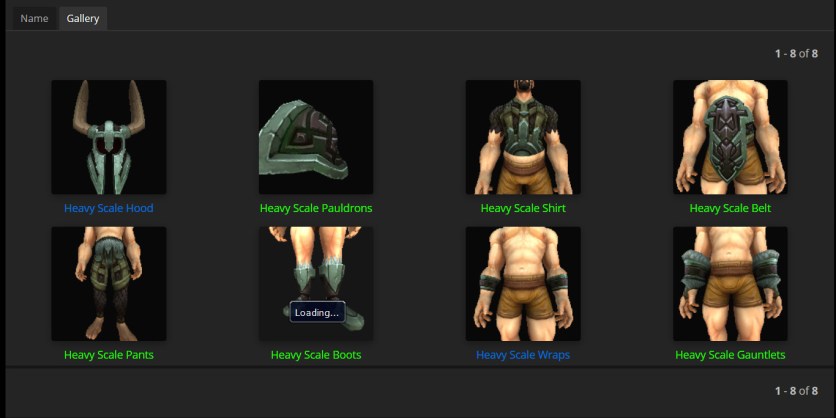 There is a Gallery Too

Now you can cut and paste from the list view into a Google Spreadsheet and then mouse over the last column on the Wowhead sheet to find the ingredients from the popup to fill in the sheet.

With this materials list, you can look up where to farm the mats to do the crafting.

In the case of the mail armor, there were some mats that were so rare that it didn’t make sense to farm them. Large Fangs were hard to farm, but I found enough of them. But North Sea Pearl, Small Lustrous Pearl, and Shadow Oil were just two hard to find. So, I elected to build a mixed set – Intellect and Agility for both the Enhancement Shaman and the Hunter. Most of the items in the set were of the correct type, but some harder to craft pieces were from the other set.

I’ve been leveling these toons using Dungeon Grinding since it’s a lot faster than doing Quests. So when I reached the appropriate level I checked to see whether the armor was reasonable. 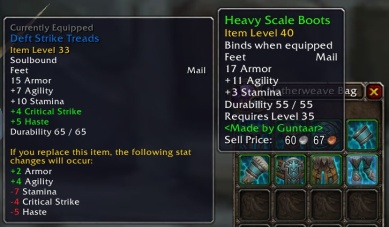 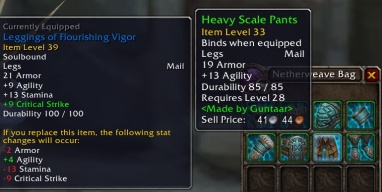 As you can see, the armor is quite attractive, but the stats are not a big win over the dungeon drop armor that I’ve gotten by the time I could wear the set. So what about using it for transmog? 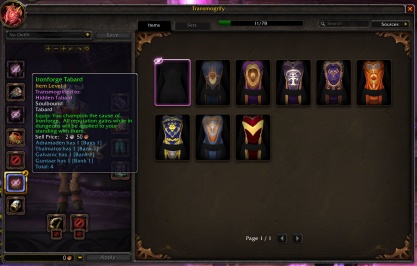 Six Gold to transmog the set is a bit pricey at this level toon. The items just don’t last more than a couple of dungeon runs so transmogging will eat up a lot of gold to keep a toon looking nice. Maybe later on at higher levels. We’ll see.

Oh did you notice that Transmog works for Tabards? I don’t like the look of tabards and I’m wearing them as I grind to up my standing with the factions. Well that means that you basically buy them all and then transmog them all to the hidden version. The good news is that they stay that way and it costs nothing. The bad news it is a pain in the tail to transmog all of them on every toon rather than just checking a box – Don’t Display Tabard once. Oh well. At least it doesn’t eat up gold. So you can hide helm, cloak and tabard for free. But you have to visit your faction capital to do it.

When I run dungeons I just camp out near the Transmog and Repair stations in my capital. That way there’s not a lot of running around as I gear up. I’m not sure how long this camping will be interesting. So far, up through level 40ish it’s the best way to go to level. New good gear and now with a few heirlooms, I can stop worrying about weapon changes.

Heirlooms – Expensive but Worth It.

I’ve purchased some Heirlooms. These are account wide weapons that scale with level. They start at 1-60 and cost more gold to upgrade to 1-90 and a lot to scale to 1-100. But maybe by then 5000G won’t seem like as much money as it does now.

Just like Guild Wars 2 has a quick way to level from 1-80 using Experience Books, Wow uses Heirlooms, which are almost as nice. There maybe purple gear that is better, but  I’m not sure. These weapons are better than Blue Dungeon Drop gear. I’ve not seen Heirloom armor. I can’t afford it. That gets really pricey when I only have a few 80ish toons. But when I get toons to 100, the heirloom armor may seem cheap.

Transmogging an heirloom weapon makes a lot more sense since you keep it for a while. But you’ll need to do it again since the transmog looks are limited to weapons / armor that you can wear. You can’t use Transmog to dress up like a high level character, but you can “dress down” at any time to look like a lower level toon. Odd choice. Not sure why. Guild Wars 2 allows you to use any of your looks at any time from the wardrobe – Up or Down.

At level 80ish, it only costs 1G to transmog the Heirloom  weapon to a nice look. But a full set of armor costs 34G and change. But then I remembered that when you pick up armor – maybe Green armor, not even Blue or better, the money you get from selling that “Trash” you don’t want to keep – except maybe for the look of it – will more than pay for the Transmog charges. So reasonable.

So bottom line, I figured out how to find recipes and craft nice looking armor. But it does not make sense until maybe at least level 60 when the armor won’t be changed out very often. But if you like the look of a crafted armor or weapon, then by all means, craft it and add it to your transmog set. When your gear changes slow down, then you may choose to wear that look for a while.

I transmog’d some Heirlooms for my level 80ish toons. These are, presumably, permanent looks through the upgrade from 1-90 > 1-100 upgrades when I do that. But by then I my find a lot better look for the weapon. The mace by the way came that way  with the white glow. I like that. A big glowing hammer, and a book. Perfect for a priest don’t you think? Well maybe, but the stats are right. And I don’t have infinite funds for heirlooms.