Well it’s certainly not ugly. But these folks have not been paying attention. While the game looks great, the developers are stuck in a game design from years ago.

What’s wrong out of the box?  I know that the modern way to review games with with a Youtube video where I shout at the screen while I deal with the frustrations of the game. But here is the old style blogging review. Here are my first impressions after a couple of hours with Revelation Online Open Beta.

When you first wake up, you get three choices of three styles of keyboard / mouse interaction.

But we don’t need three bad choices, we need one good choice. How about Tera. It’s got a great combat design. Guild Wars 2 is a close second. Just copy one of those modern designs. Giving me a choice of 3 bad designs does not make up for a good game. The designers should have played some other modern MMOs. I tried the other control styles other than KeyBoard Control and they were confusing. I could not get control of my menus or the camera. No such problems in GW2 or Tera. Just copy what works and don’t design your own. If you design your own it will take a year to refine it. And you’ll be out of business by then.

Problem two: Too much NPC interaction for quests.

Going from quest to quest requires many keystokes, F and Space. Modern games chose one key and if you  have been here before – because you have made several characters – you just F-F-F-F your way through the dialogs and move on. If the game even requires dialogs. Tera started out with click click and ended up after a few years with F-F-F-F and off to the races. But RO chooses F and Space and can’t make up it’s mind. Like we have to confirm with space since you might not want to actually do the quest after all. Compare this with the modern Guild Wars 2 hearts design where you just enter an area and a popup in the corner of the screen tells you what to do. This is to leave aside the ground breaking Guild Wars 2 dynamic events or mapwide meta events, which are a breakthrough for the genre. Compare RO with the older World of Warcraft traditional design where each quest displays one short screen.. It is not better to keep me in this captive conversation with an NPC for many clicks before I can get on with my quest. We have all been playing MMOs for years now and we know what quests are. Get on with it already.

Wings are very cool. And the controls are good enough. And with the real wings, you don’t run out of steam [or stamina] after a few seconds. These actually fly, or hover or do tricks or whatever. Way cool. But you get to try them at about level 5 and then they disappear. I never did the research about how to get a permanent copy. I got bored with the game. No way I’m paying money in a shop to get these. Give me an ugly set if you like for free. But is this PAY TO PLAY? Do I need to buy wings to have them. I never bothered to find out.

It looks like you can fly, for short amounts of time, without wings. That’s pretty cool. But I really want my wings.

Even without wings you can easily get on roofs of tall buildings.

The early quests are too easy and simple minded. I’m sure that the classes are not this overpowered and the quests are not so simple minded throughout the entire game. But like I mentioned, we have played these games before. We don’t need to be walked through dozens of quests killing weak mobs and getting ugly hats. Let’s get on with a real story here. Take a look at Tera or Guild Wars. The tutorial for Guild Wars 2 has you fighting real mobs right out of the gate and even a boss to end the tutorial. That’s fun. In RO these intro quests are all a waste of time. Get on with the real game right from the start. Even Tera’s simple  starting area – Island of Dawn – or the new one – Stepstone Isle – has real foes to fight and a real boss to kill. The older Island of Dawn even finished up with a dungeon with a boss.

Why is Revelation Online so retro? Are these  developers stuck in a time warp or something? Or does the Chinese audience expect this hand holding and other nonsense.

Oh, good. I have my stupid hat and glasses now. But where’s the BEEF???

But it’s gorgeous. The characters are highly detailed and so are the environments.

There are plenty of options to customize your character. Dozens of hair styles. Lots of options to change shapes of body and face, and lots of presets to start with.

The choice of classes looks interesting and the classes are not gender locked. Although all the races are essentially Human. There is the obligatory “cute child” race, but no animals or non-human races such as Tera and GW2 have.

And I didn’t see any transitions between instances or zones although there are apparently zones. When you raise the carp flag, you may notice that the folks around you are suddenly different folks from the ones that were there before. Looks like you were zoned to a higher level area in the same place. No portals that I saw. This is better than the zone portals all the time in Blade and Soul. These became very tiresome since they occurred so often in B&S. None evident here in RO, but you are being zoned apparently.

Did I mention that the animations are terrible? Your character floats along moving it’s legs rather than really walking and when you turn you lean. Very amateurish animations. I never felt that Tera or GW2 toon animations were bad. They both give the character weight as they walk or run. Also in RO you feel like you are in molasses when walking. I suggest they speed it up by about 20% and make the animations have some weight. The body should move up and down a little as you walk, not float. Sure you can double-tap W to dash and then space to fly, even without wings. But you’ll want to do that all the time since walking is so slow. Why not make walking a little faster so you don’t have to dash. Another case of not watching what’s happening in other games. This design, and the bad animations look very similar, even tho the two games have different developers. Blade & Soul is Korean and Revelation Online is Chinese. 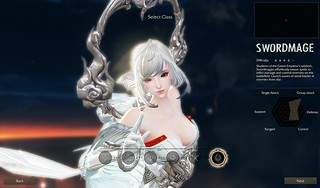 RO is a pass for me. While the artwork for both environment and characters is great, the rest of the downsides just show a game that’s not worth the trouble. Recently I’ve been playing Guild Wars [yes the original] as well as Guild Wars 2 and frankly the original is more fun than Revelation Online. Maybe these time consuming quest dialogs, floaty animations, quirky combat mechanics and the rest are what folks from Korea expect. But I recall that Tera has none of these and is also from Korea. So my conclusion is that the development team is just not experienced and didn’t bother doing any study of their competition as they designed their game.

Go give it a try. Your mileage may vary. Open Beta is up.