You’ll use a Torch 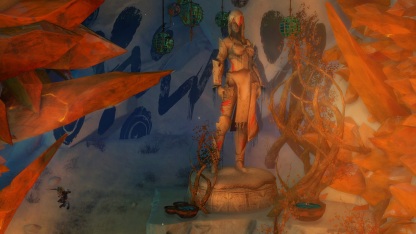 Mastery Insight in a Mouth

I’ve just completed “A Crack in the Ice” the most recent story line in Living World Season 3. It didn’t take very long: about four hours. I had some help with the next to last Story segment since I couldn’t find the entry point. Spoiler, it was on top of a pillar that you need to fly to. And it was helpful to have some extra firepower. If you can, take a friend for the last two story segments.

Crack in the Ice is the shortest of the three segments of the Living World Season 3 story. Or at least it takes the least time to play.

Out of the Shadows takes place in Bloodstone Fen and takes a while to play through and to collect some goodies. Many folks opt for the backpack, but I opted for the Mini Jade Construct. As a Guild Wars 1 player, it meant the most to have that for me.

This story segment takes a break from dragons and calls back to the “Flame Seeker Prophecies” of Guild Wars 1. The White Mantle appears and our old friend Caudecus appears as well. There are some challenging fights and some wonderful flying.

Rising Flames takes place on Ember Bay in the first map that has opened in the Fire Islands. It’s pretty straight forward and while there are some great boss battles, the story segments aren’t that life threatening.

We meet another dwarf, other than  Ogden Stonehealer. 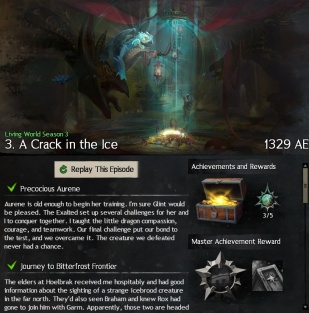 Finally, A Crack in the Ice takes us to the Far Shiverpeaks to discover issues around the rise of Jormag.

As you do this story, which involves some dress-up, as in the previous segment Rising Flames, be sure and pick up vistas, mastery insights and POIs on the map while you’re dressed up. It’s a lot easier that way than coming back, or killing enough Svanir to get another costume. 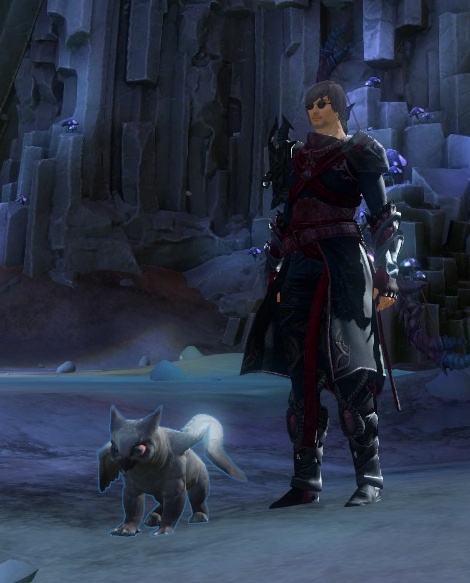 And don’t forget to pick up some extra Winterberries for this cute little companion before you leave the Far North.

PS: In case you missed it. That’s a statue of Jora, Hero from GW1, Eye of the North. The Grawl seem quite taken with her.