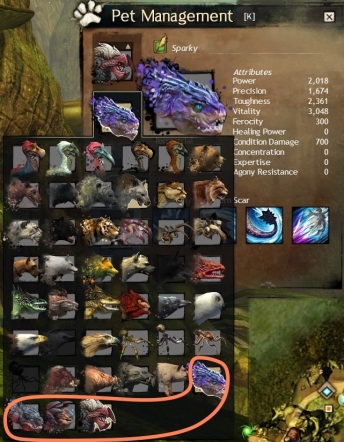 My three Rangers all have their Heart of Thorns exclusive pets now. It was not as hard as I thought it would be. The descriptions talk about some of the pets only being available after some events in the game. Turns out that it’s not that hard once you are playing in that area to participate in the events and then you just basically walk up and get the pets.

There are four HoT exclusive pets:

You can easily look these up on the Wiki pages and see their descriptions and a short description of how to get them.

Don’t be intimidated by the instructions. The Bristleback is the easiest to get. In Auric Basin, run South from the Bristleback Chasm WP to the glade where you find a couple of Veteran Bristlebacks and some Juveniles. Run in and charm a pet and run out. Even if you die on the way out, you have your pet.

The Fire Wyvern is a little harder. Basically the hard part is the wait. From the Pact Camp WP, wait until the last half of night until the chopper appears. You will probably need to stay at the camp and defend it so that it is not contested so that the chopper will appear. Once the chopper appears, take it to the canopy but do no bother fighting the Matriarch Wyvern yet. Look behind you on a ledge far below and behind for the Flame Wyvern juveniles. They are with some others, but again, a quick sneak in and out gets your pet. And then you can drop down on your glider back to the camp. You can take the chopper back for the Matriarch event if you like, but since the charmable pets are below the Martriarch platform, you’ll have to take the chopper back up. No updrafts unfortunately.

The Smokescale is pretty easy too. At the SCAR Bivouac camp there is a series of events during the event cycle. After the Gerent event ends, get to the camp and hang out and do the whole cycle. After the Charr tank rolls up the hill, the charmable smokescales appear near the tank with a Veteran Smokescale. Again you can probably sneak in and get  your pet or your friends can help you kill the Veteran so you can charm the pet. Charm is instant, so no problem with timing.

The last Electric Wyvern is also not that hard to get. If you are playing the Dragon’s Stand event, then take the central Lane and after the “Central Advanced Camp Way Point” becomes uncontested, take the path up the hill to the right just South of camp to the hill. Take the post pile opposite the one with the POI and then ignore the matriarch Wyvern, cross the vines and climb to the top to find the Electric Wyverns and a couple of easy to kill Mordren. I was able to get both of my last rangers these pets during the same event cycle by just going to the place during the event without playing it. If you time it right and enter a map after the time when the pets appear, you don’t really need to play the event. But if you enter a map where that part of the event failed, you’ll have to try again.