Posted by windyweather on November 13, 2014
Posted in: Tera.

We have discussed the templates previously available with Fed Bills, and the removal of the template system from Tera in previous posts. I’ve not been playing Tera for a while and there have been some updates. Back in April there was an event for about a month where you could obtain Luxury Fashion Coupons. We were each given 20, but it took 200-500 to purchase anything useful. I still have some of those coupons, but the event is over.

Update 16 Dec 2014: As of the Fate of Arun update, it is no longer viable to get Fashion Coupons with low level toons. The drop rate has apparently been reduced to 10-20% of it’s previous number, so rather than working 3 days for 400 coupons with Basilisks or Nagas in Celestial Hills, it now takes much longer. I’ve given up farming Fashion Coupons. You get 5 coupons for doing completing a dungeon with Instance Match, but that will take far too long to get 200-500 coupons for a nice fashion.

Sometime over the summer [2013 date not certain] a new type of Fashion Coupon was created. This time, the event continues. We are going to discuss my experience trying to farm these coupons and show some of the many costumes you can obtain. There are literally 100s of armor designs and one weapon for each class. Many of the armor designs are not very interesting since they are actually just low level armor that each of us have played in the game. But if you want to “Dress Down” and look like a lower level player, then these are interesting.

Some of the designs are quite interesting and some appear to be unique. But first let’s talk about how to get and use these new Fashion Coupons.

There is very little documentation about these Fashion Coupons.

The store does not appear with an NPC. You just right click on the Fashion Coupon stack in your bag to launch the store. Use Left CTRL / Right click on an item to preview it. This is like the preview option in the Trading Post. 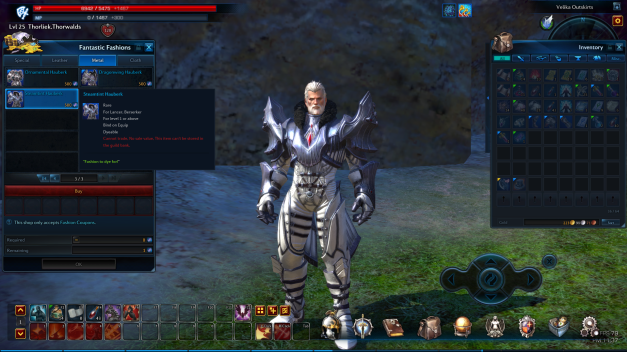 Notice the Preview Control Compass at the bottom Right of the screen. Click on the center to hide the rest of the UI so you can see your toon and rotate it to view the back. Click the center again to restore the UI. Click the (X) to close the preview. 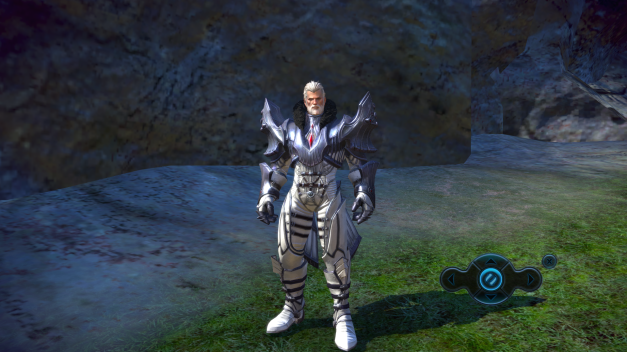 As soon as you get your first Fashion Coupon, you can pass it around to your toons on this account on this server and see the gear designs you can get. How do we get coupons you ask? Well unlike Fed Bills, you have to do more than just Log In every day.

There is very little documentation about these Fashion Coupons. Apparently some high level dungeons drop these coupons, but I don’t have any tricked out level 60’s yet so that’s out. I see lots of mention of farming Coupons in the KN dungeon. But that requires 5 people in a group. Apparently most if not all BAMs drop these coupons at a low rate. BAM stands for Big Ass Monster, which most games call World Bosses. If you play through the game to level 30 or 40 you’ve seen lots of these BAMs by now.  I searched the web and found some posts and a video. The fellow was farming Coupons with a Reaper near Bleakrock by killing Ice Giants and Bariscores. He was reporting large numbers of drops. It may be that the game has changed. I was never able to reproduce his results.

The drop rates are very strange for FCs. Apparently the game limits the number of coupons each day, on each account to about 6-10 coupons. The day apparently resets, along with the Fed Bills reset at 4pm PT.

I have tested this over several days with toons on two different servers – Ascension Valley and Tempest Reach. Once you reach your limit, farming on the other server achieves nothing. The drop rate goes so far down that  you might get 1-2 FC’s per hour. I’m not going to tell you where I farmed. For one thing, I’m still doing it, and will be for months, and I don’t need crowds there with me. And for the other thing, you may try somewhere else and it may work better.

I have tried both level 58 Reapers in Bleakrock and level 40+ toons in lower level areas and the 6-10 FCs per day limit holds. Coming back several hours later does not help. The reset apparently occurs once per day.

So this means to get 100-500 Coupons for your favorite costume is going to take you weeks or months.

Update 18 Nov: Apparently the limit of 6-10 per day was either lifted or was a bad observation. I have been able to farm as many as 100 in a long day. I have noticed apparently a better drop rate in a couple of places that I farmed before that seemed to have a very low drop rate. No change in drop rate after an hour. I did notice that if I had a lull in drops, changing channels might help. Good news. I almost have my first fashion after only 4 days. I should achieve 200 by tomorrow and get my Mystic her lovely robe. Then it’s on to a Human Plate set.

I wonder if this new scheme was in response to Blizzard talking to Blue Hole and saying that they Copyrighted Transmogrification and to take it out of Tera. The previous scheme of Remodeling Gear was a Rip Off of World of Warcraft Transmogrification so I can imagine that happening.

The very low drop rate for these FCs means that you are going to have to Grind and Grind to get those FCs. Don’t pick hard BAMs. You want a high kill rate. I’ve seen speculation that the drop rate drops off after an hour of farming. But that would be very hard to program. It would be much easier to keep a simple counter of FCs per day and base the drop rate on that count. Who knows, Enmasse is not saying. And apparently they are tweaking the rules anyway.

What is the point of making it so hard? It’s not like you have the choice to purchase all these costumes for Gems [Real Money] in the store. So they are not foregoing profit from purchases.

At least we can be happy that these costumes are permanent. There is mention that Ktera either has had or will have these costumes with limited times. Imagine working a month to get gear only to have it gone next month? Sigh. If that happens in US Tera, I’m outta here for good.

If you search for Ktera updates you’ll find some posts for upcoming changes. Changes are coming, but it’s not exactly clear what form they will take yet. Just to review, Korea Tera gets updates before Enmasse since Blue Hole is based in Korea.

I’m not sure if Enmasse if watching the Forums and changing the game based on comments there or not. But I’m not posting this there or linking from there to here. I don’t want to encourage making farming these FCs any harder. It’s already too much of grind IMHO. As I got to level 58, Tera became a grind with each quest only giving .05% of a level rather than 1-2% of a level. At that point I lost interest in leveling to 60. The classic Asian MMO design is grind, grind, grind. Compare that with GW2 where the real game starts after you quickly level to the cap. Anyway. These costumes look like they are worth the effort so I’ll give it a grind for a while.

Well how about we get on with showing you some of the things you can work for. Remember you can see this stuff for your toon as soon as you a single FC. Just use Preview. BTW, you may notice no Reaper or Elin fashions in this gallery. Well there are tons of Reaper dresses, but they are only a few designs, that you  have probably seen, and the reason there are so many is that there are lots of color choices. I didn’t include any Reaper pictures.

My Elin Mystic has a very nice frilly cloth gown that she got with Fed Bills a year ago. But that design is not available in the Elin Cloth FC designs. Mostly the Elin fashions don’ t look that nice.

BTW, if you are a High Elf Plate wearer, and like the look of Freya as you play through Frontera, then save up for Manafire Plate. As you can see in the gallery, it’s the plate that Freya wears. Good hunting.

Oh, and here’s a secret tip. The Linmetal Ore nodes in Celestial Hills have a high drop rate of God’s Tears which are selling for about 30G each. You might be able to get 20 an hour as you farm for FC’s and that would be 600G, which is not trivial for any level toon. I don’t get why these GTs are selling so high on the Trading Post when they are so easy to farm. But I’m no expert in Virtual Economics. 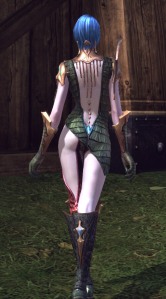 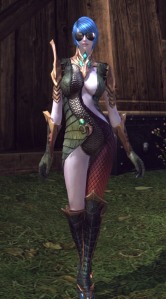 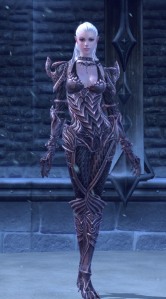 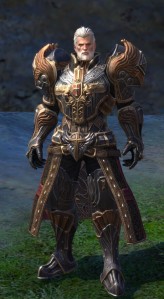 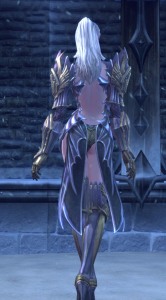 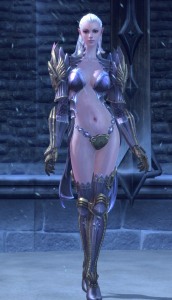 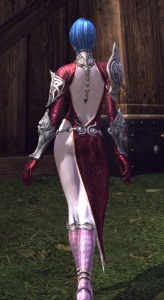 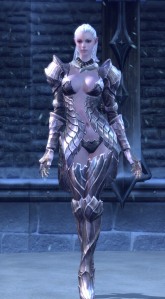 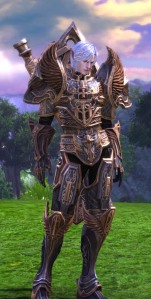 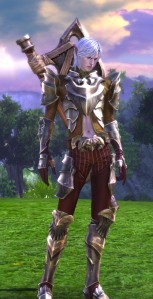 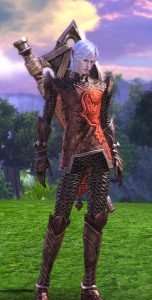 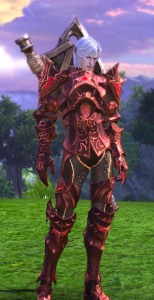 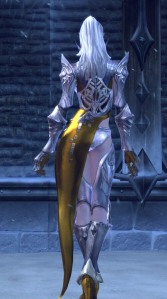 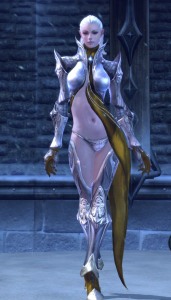