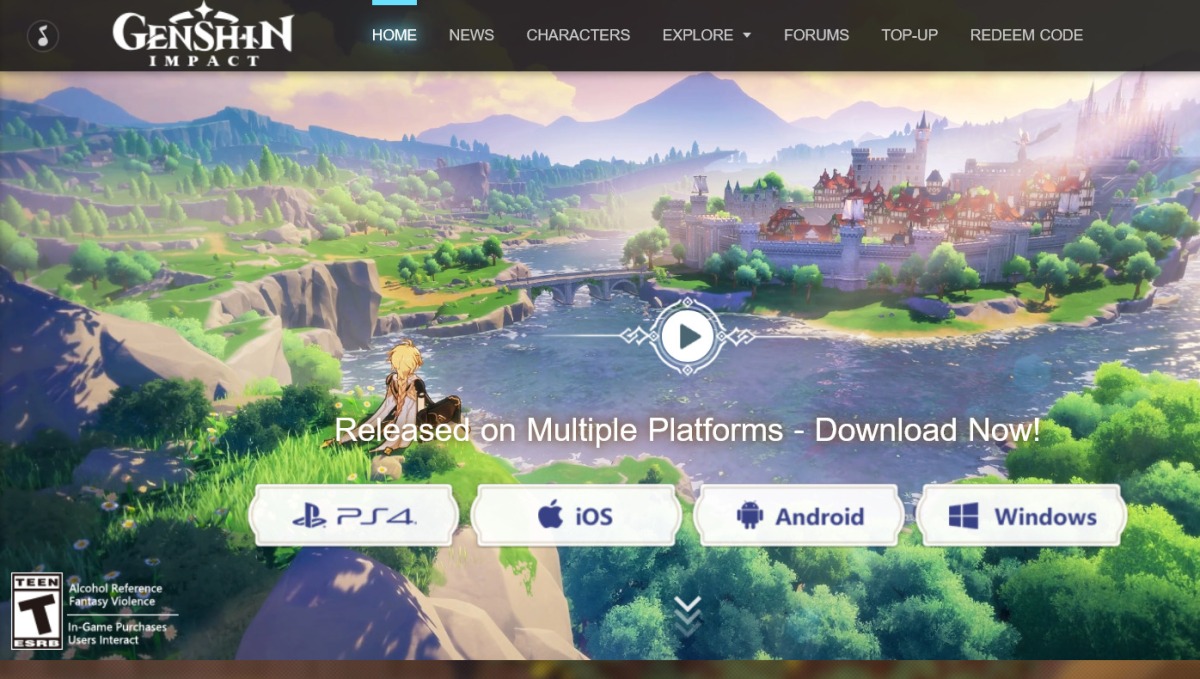 I think Genshin Impact is being over-hyped. I’ve watched a few of the videos on youtube and my conclusion is that it’s more hype than real content. And it has the problem of Cross-Play with Mobile, which means that it can’t be better than a Mobile experience. There’s a reason that Wow and FFXIV and other complex games aren’t on Mobile. The opportunity for controls is not good enough on mobile to make a game very interesting.

Here are a couple of shots from the web that show the hype. “Astounding”? Seriously? How “Astounding” can a hub based game that will run in the constraints of an iPhone really be? Who has 40GB or more on a phone to dedicate to a game? I’m sure that Genshin Impact is more like 4GB of your phone, or your PC, which is what we’d expect from a mobile game. Echo of Soul , which is an older true MMO, but with very small zones and OK graphics is about 14GB as a download, and is too large for a mobile platform.

I think that Genshin Impact is trying to get the hype train going to cash in before they are overrun by other games that are here or soon will be here. Phantasy Star Online 2 just released and on the distant horizon is Blue Protocol, which is a true MMO.

As near as I can tell from the Youtube content, Genshin Impact and PSO2 are both hub based RPGs with limited shared play. They appear to allow small numbers [4?] of friends to play together by special arrangement. These are not “open worlds” where you log in and meet up with your friends. GI wants to “look” like a big open world, but it’s not. You can’t do that in 4GB.

How to Unlock Co-Op in Genshin Impact

Also, if you’re a PC game player and want to see what happens with a mobile game, you can easily try World of Kings, which works on PC by running in the Android Emulator called “Blue Stacks”.

Several games have apparently worked closely with BlueStacks to provide a simple way to run these mobile games on PCs. World of Kings works quite well. It’s a lousy game, IMHO, but it works just fine on PC. And of course it’s a quick download since it’s a mobile game. The installation is quite snappy and easy since they want to draw in the maximum number of players with Ease of Use.

If you’ve been a Wow player, you may see lots of familiar assets in this game. But that’s a story for another venue.

This Free to Play World of Kings mobile game shows off the limitations and monetization strategy of mobile games. It employs Auto-Pathing to find the next quest or turn-in is required given the limitations of the interface. But it goes further and employs “Auto Battles”. Unless you do something specific, the game plays for you with just a few clicks [touches]. That is for a while until it suddenly drops you into a Instanced Boss battle that whips your butt. I think this is carefully designed to draw you into the game, give you a taste of a nice game and then toss you up against something to encourage you to Spend Real Cash to beat that boss and move on. And my guess is that it’s a grind and or real money sink after that.

Genshin Impact is F2P but It Can’t be Truly Free, Can It?

There have been some Youtube videos talking about the monetization strategy of Genshin Impact and how it’s very different from the normal Pay to Win strategy. But I’m guessing if it sounds too good to be true, then it probably is.

I suggest that if you are not prone to the addictive nature of these F2P strategies, then you might give it a try. But addictive spenders beware. I’m guessing that will change.

I’m playing FFXIV, GW, and WOW-Trial. None of those are suitable for Mobile. I may try Blue Protocol when it eventually comes out, but I don’t have interest in Genshin Impact or similar “Mobile” cross play games on PC.

Oh, and there’s This

PC-Gamer just published an article on the Co-Op mode. Looks like Co-Op mode is not that good either.

Looks like the hype has worked. As of 12 October we have this.