About a year and a half ago I bought a Vizio P65 TV. The Model was C1 at that time. This model is apparently no longer available, apparently. The new model is E1 as shown here. 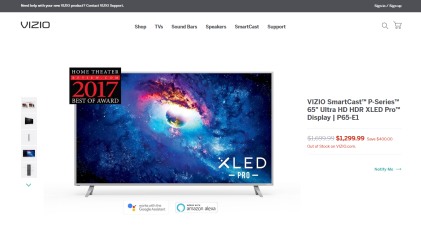 Just after a year, when the TV was out of warranty, two of the four HDMI ports failed. I paid about $400 for an out of warranty repair to replace the “Main Board” and the HDMI ports all work now. The repair required two folks, since the TV is very heavy and must be laid down on it’s face for a mainboard repair. Also the folks drove over 200 miles to reach my house, so I doubt if they broke even on the repair.

Now the TV is Rebooting

However, after this repair, about twice, or more, times per day, the TV seizes up and reboots. 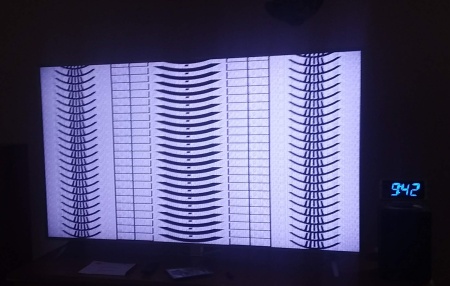 When it reboots, almost always, but not always, the restart process starts with the screen showing a repeating pattern of the lower few rows of the screen. Then after about 10 seconds, the TV restarts showing the Vizio brand chevron. This example happened while watching the Dish Hopper.

Here’s what it showed about an hour ago:

At the time I was watching TWIT using my Media System which is a Linux Mint 18 system. You can see the date and time in the repeated screen portion which is basically the task bar of the Linux Mint system.

The TV is connected via a Denon S930H 4K HDMI switcher / AV Receiver.

The failures do not necessarily happen when the TV has been on for many hours. Sometimes it happens shortly after I turn it on in the morning. My usual pattern is to turn the TV on in the morning and off at night and show a black screen when I’m not watching it. The failures do not happen more often the longer the TV has been on, and are not correlated with the source or content.

A support call to Vizio was not satisfying since they said, “Oh. It is clearly the Power Supply.” In other words, you paid to have the main board replaced, so now pay to replace the power supply. Well, nope. I’m gonna suffer along with these reboots until it dies.

I did call about this problem to document it during the 90 day warranty after the Main Board replacement.

I’m not psyched about the failures within so short a time, and especially the customer support of Vizio and will consider another brand when replacing this TV when it dies.

This 4K UHD TV has Full Local Dimming – 128 zones, HDR, HDR 10+, 240 FPS, and is fully smart with WiFi and a LAN port, which is essential for me since I want it hard wired not just WiFi. Comparable TVs from other manufacturers are the same price or more. Sansung only uses Edge Lit displays in this price range. LG and Sony have comparable models at comparable prices.

I suggest avoiding Vizio TVs. Their support attitude is not what you should expect from a company selling expensive items. If you do select Vizio, I suggest paying extra for as much extended warranty as is available.