Charlie has reached level 65, got the new gear and flight before finishing the story quests.

The key to doing this is doing dungeons along with Story Quests. At level 61, Charlie did Sabex Armory twice. Both were good runs and that pressed him up to 63 while he was doing the stories. He was using a 50% level post bonus at the time.

Then while pressing on with the stories, he did Macellarius Catacombs twice. The first run was good with skilled players. But his gear wasn’t that good, so he died once and lost a crystal. The second run was a disaster. The healer either wasn’t paying attention or wasn’t skilled. Charlie actually died a few times and had trouble with his 10 minute cool-down on Crystal Binds not being up. But even with that, Charlie made it from level 64 1/2 to level 65. At that point, he ported back to Highwatch, got “Fresh Arms and Legs” – new higher level gear, and then back to Amadjuak Trading Post to get a flying mount from the quest “Morick’s Research Paper“. I find it odd that folks are not keeping the Tera wiki’s up to date with recent quests. This “database” is apparently automatically “Data-mined” and contains no human entered data. I could not find a wiki page referencing this quest even though it has been over a year that this quest has been the way to get a flying mount. I think that says something about the game. Anyway. Here’s the new gear in Highwatch. 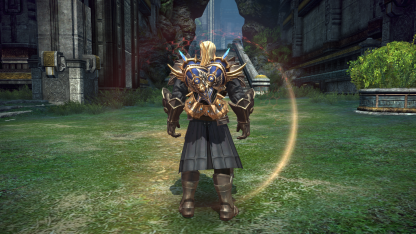 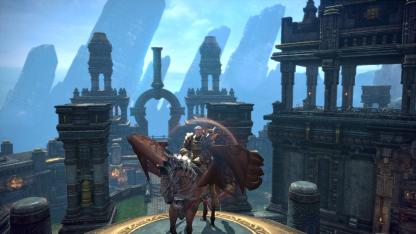 I was able to fly everywhere to finish the last quests except for the last fortress. The mount could not fly there. No problem tho since the gear was so powerful at this point that I could mash my way through the remaining story quests without issue. 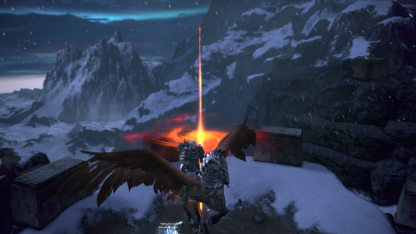 Hurray. Now we’ll see what the Elin Gunner is like.