I’ve got a couple of my Valkyries to level 65. With all the buffs and XP Boosts during the event, it’s not that hard. The trick is to run a couple of dungeons though. I ran the Armory twice on one character and the Armory and the Catacombs each on the second character. With both of them I reached 65 before going inside the fortress for the final battle with Dakuryon. Things were a lot easier at the higher level, even though you don’t get a better weapon and I didn’t bother going back for the better armor.

In the past when I had done dungeons the wait time, even for a DPS character was only 5 minutes or so, but things have slowed down quite a bit on Tera now. So it’s a weekend – I was leveling these both Saturday and Sunday – and things should have been hopping. But the delay times were very long. 15 – 18 minutes to get into a dungeon. 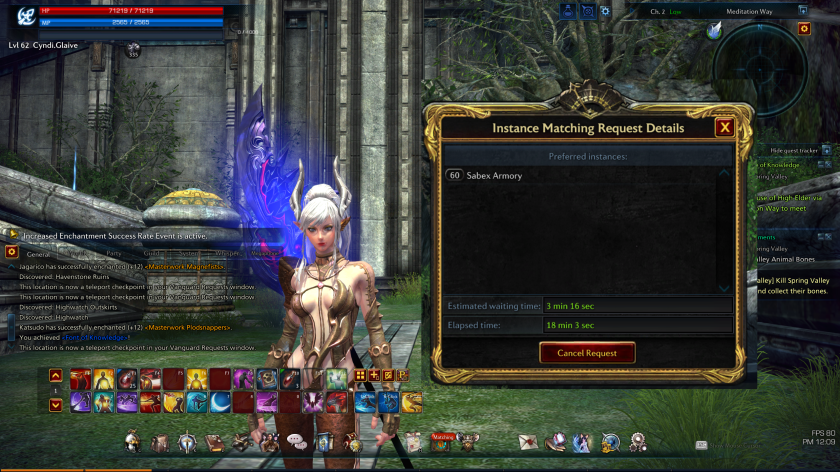 Someone in chat said something about the delay times being long to keep down bots. but I’m not clear on how bots would be smart enough to run dungeons or why the 15 minute cooldown on these level 60+ dungeons isn’t enough to discourage bots. Seems to me that Enmasse is just going on the cheap and not providing enough hardware to run the dungeons. Either that or the  population is so low that there weren’t enough folks that actually wanted to run the dungeons. I doubt that. Towns seem busy enough, although not as busy as they have in the past. Here I’m almost level 65 about to do the Shut the Front Door quest. A level 50% XP Boost has been active for the last several hours. Although it’s not that useful to do all those Vanguard Requests. They don’t give very much XP and basically after the first few, you are just getting trash rewards.

So the good news, it’s pretty quick to level a character in Tera these days. The bad news is that doing it with Dungeon’s is pretty much over. Gone are the days that folks are running dungeon’s from level 20 to level 65, so the wait times are not worth it. It’s even hard to find the parties you’ll need for the dungeon’s that are really worth the effort like Necromancer’s Tomb and Saleron’s Sky Garden. I had to find folks at the portals. No response in Area chat and no luck using Instance Matching. In case you were wondering, here’s how long it takes to level a Valkyrie to 65.

About a day of play time. Have a good time with your Valkyrie.