The oil coming ashore on the gulf coast is making a terrible mess. In order to save the wetlands, the wildlife and the seafood industries of the area it is clear that the oil will need to be cleaned up, but this is not going to be the same problem as we faced in Alaska. Men in haz-mat suits with brushes and steam hoses are not going to be able to tackle the problem. So how might this problem be solved?
I recently saw a program on HD Theater channel which described the De Beers diamond mining dredge called Peace in Africa. This ship mined diamonds from the ocean at the rate of about 240,000 carats per year. See: http://www.theartofdredging.com/peaceinafrica.htm and http://www.debeersgroup.com/en/Exploration-and-mining/Mining-operations/South-African-Sea-Areas/
Here is a picture, copyright De Beers, of Peace in Africa.

If we, as a civilization are willing to go to this time and trouble for diamonds, surely we can go beyond these lengths to restore the ecology, the wildlife and livelihoods of the folks of the gulf coast after this tragic accident. This paper looks at some of the problems involved in building cleaning dredges to solve the problem of cleaning up the Gulf Coast.

While I am not a process design engineer, I am making a proposal for some of the problems that will be encountered along with some candidate approaches. The intent of this document is to encourage debate of the process required to clean up the Gulf coast after the Deep Horizon oil spill.

There are a number of challenges to be solved to clean up the oil from shallow water, wetlands and beaches:

Schematic Design of the Dredge

Example Renders of a Dredge 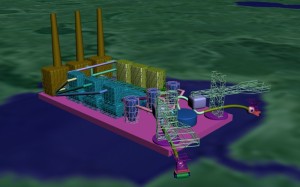 This example shows a platform 100m x 50m with two dredge booms. The processing plant may require a platform twice that size. For comparison, the diamond dredge mentioned above is over 200m long.
I have not tried to design any way to move the dredge through the marsh. It seems clear that either towing with anchors or walking with legs will be required.

The recovery head is suspended from the booms which move back and forth and can direct the head via cables from above. Each head contains a cutter head to process sand, mud and vegetation including small trees as well as powerful rotary pump to recover the debris with sufficient water to avoid loss of the contaminated debris.

The processing plant is likely to be more complex than a diamond dredge, which cost about $110m to convert from a cargo ship completed in 2007. But with BP company profits exceeding $20BPounds in 2007, it seems clear that money is not a problem. Many of these dredge platforms are going to be required to clean up the marshes in a reasonable amount of time.

The dredge heads do not ride in the marsh but are suspended above it to avoid stirring the mud and making the oil harder to recover. The platform floats over land that is already cleaned. The boom head is steered by cables from the boom above it.
The dredge heads resemble vacuum cleaner heads with grinders that cut up vegetation including grass and trees, as well as mud and sand and then using a large blower to pump the contaminated debris and water for processing.

The distribution plenum allows parts of the dredge to be taken offline for repair or maintenance.

The water and oil must be separated so that clean water can be returned to the marsh. Removing salt is not done, but toxic metals should be separated with the oil. This might be done by a large blanket of absorbent material which will survive the high temperatures required to incinerate the oil. Oil is trapped in the blanket and then burned off the blanket while the water does not stick to the blanket and is discharged. Further cleaning may be required of the water but the blanket should be designed to remove the oil to a very large extent.
The smoke is sent to the stack scrubbers.

The debris, including all sand, mud, shells and vegetation are incinerated to remove all oil and other toxic materials.  It may not be necessary to remove the ash since this may not be very harmful to the environment. The smoke from this incineration is sent to the stack scrubbers.

Before releasing any smoke from the platform, it is scrubbed using a suitable method to remove any toxic gases and metal oxides. This technology is similar to that used in coal fired power plants.

The oil recovered will not be enough to supply the energy requirements of the platform. An oil pipeline  dragged behind the platform to a mother ship offshore will provide the energy and pump clean sea water from offshore to aid in the processing. Additional water will be required at low tide for the dredging. As the rig operates, it adds a large amount of water to the marsh which washes back out to sea taking the silt stirred up by the operation to mitigate the drowning of uncontaminated marsh with silt.

Where Do We Go From Here?

I hope this paper spurs debate and design. No matter what happens from now on, at least one such clean-up dredge will be required to clean up the Gulf Coast marshes. The sooner we start design, testing and construction, the sooner we will have the mess cleaned up. It seems clear that a multi-disciplinary team of ecologists, process engineers and heavy equipment construction contractors are required to complete such a large project.
Darrell Duffy
Coos Bay, OR
6 June 2010