Dragon Age: Origins is a new game from BioWare, the makers of Baldur’s Gate back in the last millennium [1998]. Way back in that ancient history, a stand alone RPG made a lot of sense, but in these days of X Box Online, Sony Online and dozens of Free To Play MMOs like Perfect World, Dekaron [2Moons], Ether Saga, etc. it seems odd to bring out a game with no online play.

There are many reviews out there. Here is one from SlashDot.

The other odd thing about DAO is that the entire description of the game has all the keywords and phrases that you would expect from a game that was online. They talk about parties and loot and leveling and approval and so forth. Here’s a quote:

The Approval system is a fun way to learn about each of your companions. There’s a surprising amount of story to be told for each of them. Surprising, at least, until you realize how much story there is in the rest of the game.

The reviewer does talk about having finished the game. I played Guild Wars for months and was nowhere near “finishing” the game. And during the experience, I recall that I and other folks came back to do quests long after they had completed them. The attraction, in part at least, appeared to be that the high level players had fun helping lower level players to finish the quest and progress in the game.

None of this will be possible in this historic throwback game that is not online.

So it appears that DAO will be a few hours of play and then it will pass into history.

Baldur’s Gate and its sequels have long passed into history, but I occasionally log into my Guild Wars account and the community is still active and vibrant.  I look forward to Guild Wars 2 which has a surprisingly similar logo to that of DAO. But GW2 will be an MMO and from everything that I read will improve two of the limiting issues with Guild Wars: The low leveling cap and the difficulty with solo play, when you can’t find your friends online. 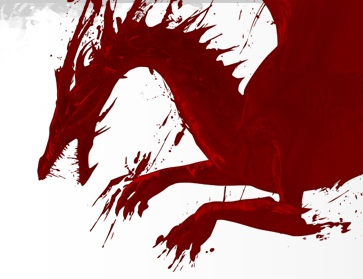 As you can tell from the other Guild Wars posts on this site, I found much to enjoy in Guild Wars in particular and MMOs in general. DAO looks interesting, but without online play, I have no interest in even trying it.