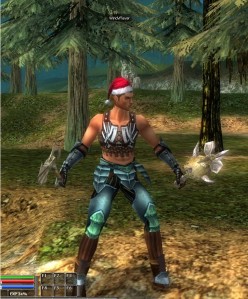 2Moons is an MMORPG that is free to download and free to play. As we have seen, Guild Wars is purchased and then is free from monthly fees, while World of Warcraft is purchased and there is a monthly fee to play. This article will compare 2Moons with Guild Wars. I’m by no means an expert on MMORPGs, but my extensive 3D and software experience may allow me to lend some insights into what is going on with 2Moons.

The first question that arrises as one considers 2Moons is the issue of profitability. How can a company make any money with a game that is free to download and free to play? If one reads the terms and conditions, one finds that advertisements are mentioned even though at this time, none appear in the game. At this time, there are materials for sale at an Acclaim store for real money, which enhance the game experience. These materials come in several general types:

It seems quite clear that Acclaim is not allowing one to purchase a means to become more powerful or successful in the game, but only to allow one to look cooler in the game.

2Moons is not like Second Life. The 2Moons currency, DIL, does not exchange with real money. Acclaim coins are used to purchase 2Moons things on the Store and these are purchased with your credit card or from your bank account with real money. They are very sensitive to those trying to charge real money for game loot.

I first took a look at 2Moons about one year ago in November 2007. At that time, there seemed to be several problems with the game.

My recent experiences are very different. Perhaps there were real changes in the game, or perhaps my experience with Guild Wars allows me more skill in my playing of the game.

2Moons has several problems compared with Guild Wars. Here they are in order from more serious to trivial:

Other things are just different.

Here are some screen shots:

Leveling up is most easily done by finding a series of these at the correct level and killing it. It drops lots of loot and allows lots of XP and they are easy to kill. Just keep looking, they are not hard to find.

Here are 4 of the 6 character classes. Of course they provide Christmas hats for a nominal fee. Not sure if they will stop working after the holidays or not.

2Moons is 17 and up for blood and presumably for partial nudity, or at least very suggestive costumes. Clearly more skin showing than with GW.

Someone in the forums has compared all the character classes with WOW. Probably only the original version of Wow since I’m sure they have many more classes now. 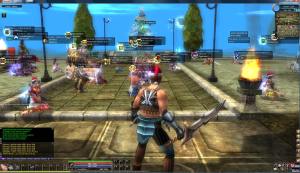 Lots of folk camping out selling their loot. There is no crafting by characters, so all this is found loot being sold for exorbitant prices. It is possible to avoid all this.

It is all about how you look doing it. All areas are persistent, so you will run across other players killing there. Although the clip distance is very short, so you may not see them for long as they come in and out of view. You may find their loot they don’t pick up. The loot is reserved for the person killing a foe for the first few seconds, but after that it’s up for grabs. Presumably, the loot disappears after a while if no one picks it up.

2Moons is a toy MMORPG, not a serious experience. But it can be an interesting way to get started with the genre as long as you don’t get stuck there before you move on to something more serious like GW or Wow- presumably. The price is certainly right. I suggest going into it with a friend so that you can investigate cooperative game play. Use Skype or Teamspeak or another voice system beside 2Moons and enjoy the persistent world together.