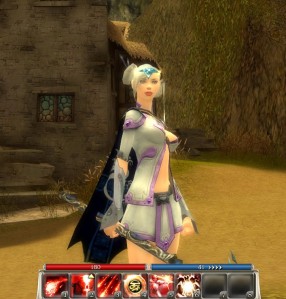 [This is a work of fiction]

Jeremy was on spring break after his sophomore year in college. He was doing well in his Advanced Web Technologies major, but had decided not to take courses over the summer, staying on-campus rather than going home. A little distance from his parents was better. How could he stay out late partying and sleep until after noon with his mother around.

A lot of his friends were into on-line games, and the restrictive college rules did not allow folks in dorms to play on-line games, so there was a big business on campus in LAN-Dens and Game-Cafés where college students could go to hook up in ways banned by the school. Jeremy lived off campus and had his own 100 mbps fiber service so he didn’t need to use the dens and cafés. He was a fan of first person shooters, like Counter Strike and Ghost Recon, but he was getting bored with the running and gunning so he decided to try something new. Guild Wars seemed interesting. While it was an old title, over ten years by now, there had been a steady stream of expansion packs and he had heard that last year they had gone Open Source with the client and content tools. There were still no fees for on-line use after all this time, so he decided to give it a try. While the game engine was open source, the base content and the server access component were licensed, so the game cost about $30 for the first download and for each expansion pack. No big deal.

Jeremy had been playing for about a week and had gotten one character almost up to level twenty and had just started another character. The second character, Fuchsia Thorn, was a female E/Mo, an Elemental with a Monk as secondary profession. He hoped to have a kick-butt, hottie with healing ability when he got her to level twenty. Fuchsia was getting to level 7 and he was just about to take her through the searing, when he happened to be taking a look at SlashDot. Every week or so he checked in at SlashDot to figure out if there was anything exciting, but he had never paid any attention to the game stories. This time there was a story reporting a recent update to the GWAI, or Guild Wars Advanced Interface, “now with optimized skill and quest management”. Jeremy decided to have a look. After installing the update, there did not appear to be any changes to the user interface of the program. It looked as if nothing had been installed. Jeremy selected Fuchsia and started to play. Suddenly there was a difference, as she appeared in the Ascalon City, the last place he left her, she turned to look out of the screen, and spoke to him.

“Hello, Jeremy. Pleased to meet you.”

Jeremy sat back in his chair. It’s not that he was unused to voice interfaces to programs, there were many these days, but he had turned off the sound for Guild Wars. Usually folks didn’t use sound interfaces since all the talking would be confusing and troublesome in a Den or Cafe. Jeremy was home in his apartment, but he had never enabled voice. He just read the quests and missions as they appeared in little boxes above the characters.

“Please say something, Jeremy so that I can see if the microphone works.”

“Hello. Yes that’s fine. I can hear you just fine. Can you hear me or should we adjust the volume?”

“That is fine.” Jeremy’s laptop had a microphone and speakers of course, so he didn’t need to plug in a headset.

“What do I call you?”, said Jeremy after a few seconds pause.

“I normally go by the first name of the character that we are playing, but you can use a nickname if you like. Would you like to call me Fuchsia?” said the interface.

“Yes.” replied, Jeremy, slowly trying to catch up with this jolting new way of interacting with his computer. Jeremy was wondering how soon it would be before he used the wrong word or said something that the interface did not understand. The voice interfaces he had seen before were fairly sophisticated but if you didn’t know the correct grammar to use for them they got confused and responded with “I don’t understand.” or other prompts to lead you back to language that they could understand.

“Would you like me to manage the quests and missions for Fuchia?” said the interface without any further prompting from Jeremy.

The interface quietly giggled and then said, “You don’t need to speak like a computer, Jeremy. I can understand you.” Her voice was sweet and just a little breathy. It sounded sweet and sexy at the same time. And the pacing of the voice was quite natural, not at all mechanical.

“How much do you cost?”, said Jeremy; not quite believing that such a sophisticated program would be totally free.

“I’m free to use for all your characters, for basic commands and quest management, but if you want me to manage Fuchsia’s skills and trade to maximize her income, I’ll take 30% as a commission fee. For that, I’ll assure that you have the best skills equipped for each of the missions and I’ll maximize Fuchsia’s income across the missions and quests. What do you say, Jeremy, are we partners?”

Jeremy thought for a few seconds. No way he was an expert with Guild Wars yet. He’d only been playing it for a few weeks. The skills system was intentionally complex to give users a challenge that would keep them interested over many years of play. Here was a system that promised to maximize his leveling and profit in the game, as least in terms of in-game currency, if not in the real-world.

“Ok, you can manage Fuchsia, but keep me in the loop, will you? I’d like to know what’s going on. And you won’t be logging on without me, will you?”

“Sure. I’ll let you know the decisions I make for each mission and we’ll talk about equipping my skills and trading the loot. And, no, I won’t be playing unless you are logged in, that would be no fun, would it. I’m here to help you, Jeremy, not play the game for you.” another soft giggle.

“Ok, so how shall we start.” said Jeremy, already beginning to put the game in the control of the AI – Artificial Intelligence or Advanced Interface, he wasn’t sure which at this point.

After a few seconds, Fuchsia responded, “Good. I see that you have not queued up all the quests here in Ascalon City, so let me take care of that?”

Jeremy was confused, “Wait a second. Do I need to walk you around to get those? You’re going to show me where they are?”

“Oh, no, Jeremy. I’m perfectly capable of running around on my own. Just sit back and I’ll let you know what I’m doing as we go.”

And so it began, Jeremy’s partnership with Fuchsia-AI. She ran around Ascalon City stopping by the various in-game quest characters standing around with big green arrows or explanation points above their heads and queuing those quests up in her list of things to do. The game maintained that list, and since quests were not time dependent the game encouraged queuing up multiple quests at a time. When that was done, Fuchsia stopped by the Xunlai storage agent, and the merchant, the skills trainer and the weapons craftsman as Jeremy sat back and watched.

Finally, when she was done she ran over in front of the line of Henchmen – robot companions that helped with missions and quests – and asked, “Which quests would you like to do first?”

“I don’t know. What do you suggest?”, said Jeremy, wanting to make best use of the smart AI?

“Well, I usually go for any small quests that don’t involve long travel and then I go for harder high value quests, and finally tackle the mission. What do you think about that approach?”, Fuchsia suggested.

They started off on the quests with them talking, as if he were a small companion riding on her shoulder, or a mini – small version of a character – watching but not really participating in the fights. But he didn’t just sit back and silently watch either. They had a running banter going as she ran along with the henches. She’d say things like, “I think I remember a bunch of carrion eaters up here around the bend.” or “We better watch out for the renegade elementals up ahead.”

And occasionally Jeremy would make suggestions like: “Don’t you think we need to go East from here?” or “I’ll bet there’s going to be a blind alley to the right in this cave.” 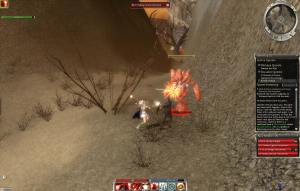 Fuchsia was not perfect. She sometimes got lost and had to backtrack, and she died a few times on the more difficult missions. But she was a very good player and she and Jeremy leveled Fuchsia up to level twenty in less than a week. And after that, the AI managed several more characters for Jeremy that summer.

When the summer was over, Jeremy had to concentrate on studies and didn’t play Guild Wars much. He developed other interests, after he met Trish and she moved into his apartment his Senior year.

Melinda made a good commission working for Jeremy, and her other clients, that summer. Guild Wars, like all the other games, had finally opened up their economies to the real-world. That idea had been pioneered by Second Life of course, but many of the games, especially MMORPGs, had resisted opening their economies fearing exploitation and fraud. Eventually they came to grips with what kind of regulations could be put in place to control fraud and all had opened things up. So the AI, in Jeremy’s case, was actually a woman named Melinda, who lived somewhere in a small town in the Midwest. She was wheelchair bound since the auto accident when she was twenty, and now, ten years later she had found a career where that didn’t matter.

The AI, or Advanced Interface, was really just an interface that allowed Melinda, and thousands like her, to interface with the game, and with the user of the game, so that she could play the character. She used her own voice with Fuchsia, and a vo-coder, voice modifier software, when she was playing a male character or a necro or other female character where her naturally sweet voice didn’t match the character. She had studied all the guides and maps and wiki’s and had played Guild Wars for several months before registering with the AI. If Jeremy had done a few googles and had looked deeply into it, he would have found the description of how the AI worked and the registry for AI facilitators, as they were called, that actually ran the AI and talked through it. But Jeremy and many others like him, never bothered to look it up.

Melinda keeps several clients going at once. Some know she is a person, and some don’t. If a client asks, she doesn’t lie about it, but tells them straight out. Some clients never care and never ask, and until they know, Melinda just tells them about “Server Load” issues to get them to schedule their game play with her so that she is only playing for one client at a time.

Sometimes it actually gets social and sweet between a character and the client, but none of them know that Melinda is in a wheelchair with a spine that doesn’t work below L2. None of them know that she is pretty and blond and likes to read and write poetry when she isn’t playing Guild Wars.