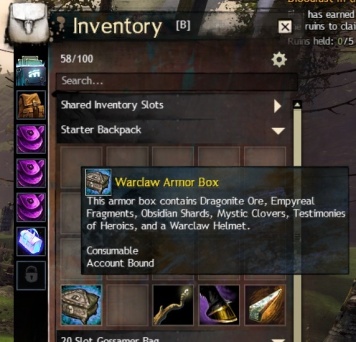 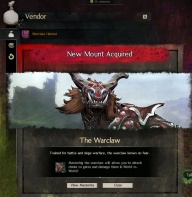 So the process is to Get all the items in the Warclaw Achievement by grinding WvW stuff, enable the Warclaw in the Bottom Left area of the WvW panel. Then Activate the Warclaw Reward Track and grind that bar all the way to the end to get the Warclaw Helmet. Then the Warclaw Certificate shows up in the Vendor for 8 Gold. Buy that and use it. And Voila, you have the Warclaw mount. Sigh.

Oddly, the Warclaw Helmet is still for sale by the vendor, although it’s of no use. Maybe that’s required since you might accidentally toss out the Helmet you got from the Reward Track rewards.

I’m not clear on why the achievement just doesn’t give you the mount. Why do they want to charge you an extra 8 Gold? Just an annoyance? Or does it prevent low level players from coming into WvW right after the beginning story scene and grinding this mount as the first thing they do? Well, by the time you get the WvW Reward Track done, you’re likely to have the 8 Gold anyway, so I’m not clear that’s a big deterrent for folks that want to start out with their first character having a mount at a low level. Hummm.  Maybe they have done the math and you don’t really have that much gold after the 5 – 6 hours. Don’t know.

So once you have the Warclaw, you can assign a hot key to mount it, and you can dye it.

However, there are some strange issues with the skins. This may be changed or fixed later as more skins are added to the Black Lion shop. But at this point, the skins that are in the shop don ‘t show up in the Mount Skins Dialog like they do for all the other mounts. Maybe they do if you buy them, not not until you do. Here is what I see now:

In the mount skins dialog of the Hero Panel, notice that lots of skins show up for each of the mounts. Presumably you can get those skins in the Black Lion Market. But only the default skin shows for Warclaw. But there are some skins for sale in the Black Lion Shop. A set of 5 Skins. 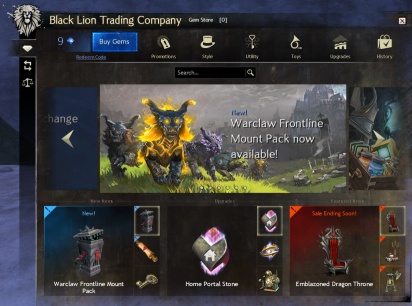 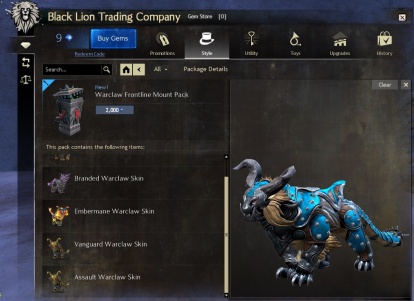 While the first 3 of these look like actual skins that change the shape of the Warclaw, the last two are just dye jobs – with slight pattern changes to the dying. Here’s a comparison of one of the last two with a simple dye job with a similar dye. 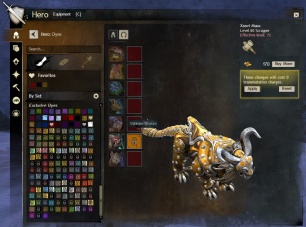 So the pattern is a little different. Looks like your 2000 gems are really only getting you Three interesting skins, not Five. I’m sure that over time lots of new skins will arrive on the scene.

WvW Grinding and Open World Use

So, the Warclaw is about five or so hours of grinding to get. Just follow a good commander and if they bail out on you, switch maps to find another one.

The Warclaw is not as fast as a Jackal in the open world, so you’ll want a Jackal. Also Warclaw can only jump twice, not three times. Using the Landing Damage skill takes some practice since it leaps ahead before it lands.

If you are going to play WvW you’ll want a Warclaw. Everyone was running away from me while I was trying to keep up on foot. I’m sure this mount is changing the WvW gameplay. Comments from folks were positive that it was speeding things up in WvW.