Recently Wow developers announced removal of many portals in the game and there was an uproar.

While World of Warcraft v8.1.5 adds a lot of new content, it also is removing things from the game. In this case, many of the portals that get players around Azeroth in a timely fashion are being taken out to keep “the world having a meaningful size”. However, this design decision has sparked a massive backlash with the community, with several threads topping the 5,000 response mark. A new dev post acknowledges the outcry but essentially says, “Sorry, not sorry. We’re sticking to it.”

Wow Travel Has Always Been Slower than in Other Games

All the other games I play have always had portals. Wow has been alone is not providing universally fast ways to get around the world. If you aren’t a mage, or don’t have a mage in your party, then it’s always been a trek to get to a ship, airship or portal to where you want to go. Of course you can fly long distances, but those flights take “Real Time”, whether you use your own mount or take a flight they move at the same speed. Ship / Airship travel is a pair of short cut scenes and a portal across the world. At least they got that right. But unlike other games, there is no setting for SKIP THE TRAVEL CUTSCENE I have seen hundreds of times. And I still have to stand around waiting on a Wow [Air]Ship rather than it being ready to go when I am. No waiting in FFXIV on any ship and the cut scenes are optional.

It has long been a convention in most MMOs that to teleport to somewhere you must have been there before. Guild Wars 2 is a good example of this convention. Asura Gates, which are like Wow Portals take you anywhere, and will work the first time you use them. But the Waypoints must have been visited on foot before you can teleport to them. But in GW2 once  you visit a place, you can instantly travel across the world to any waypoint, for a small fee.

Most MMO use Teleporting 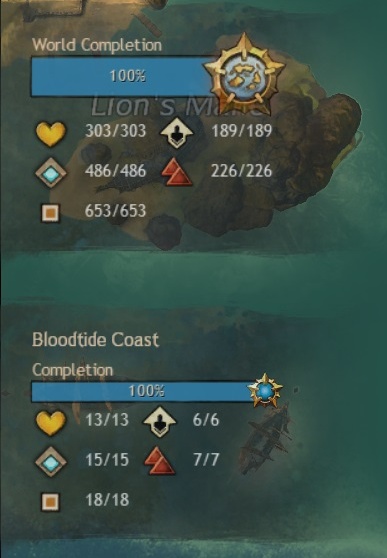 Above are GW2 Asura Gates and a Waypoint. All instant travel options in GW2. One of the capital cities – Lion’s Arch – is the central hub and there is a city portal and dungeon portals in only this place. As new content was added for Heart of Thorns and Path of Fire expansions, new portals were not added to Lion’s Arch, but Waypoint travel is possible to these areas directly after the opening sequence quests for these areas. For those players without these expansions, or before the content was opened with the main quest, any Asura Gates to the new areas would of course not function. But they were never added and are not needed. The area of a mid level map shows the cost for Waypoint travel. The last picture shows the number of waypoints in a typical map and the total in the core world. Many more than there are flight points in Wow. Of course Wow has the additional complexity of two Factions, which GW2 does not, but flight points are already worked out for the two faction areas.

Tera uses Teleportals to get from hub cities or outposts to outlying areas, and Return scrolls [or Unstuck] to return to the city. All instantly with low cool downs. Portal Scrolls work to distant places and are available for a modest fee – for end game players, 1 Gold is pocket change. Yes, you can fly, and must fly the first time to Cities and Outposts – or purchase a scroll. But the flight is short to a portal so it’s not “Real Time” in any sense of the word.

Final Fantasy XIV uses Teleporting inside and between hub cities and outposts. The left one is a large one in a city or outpost, and the small one is used inside a city. Yes you can ride a ship or airship between main cities, but most folks skip the cut scenes, which are short anyway, so these trips are just as fast as teleportals. Inside hub cities Aetherite Crystals are a short walk away and then you can teleport anywhere to the other dozen or so crystals in the city for free. Using an Aetherite Crystal to travel across the world costs 100 – 500 or so copper, which is pocket change for anybody above level 20.

So why is Wow making War on portals? Yes, I agree with some of their administrator posts that point out that portal hubs are out of control with too many options. But this is a result of their Point to Point Portal Design. They have only had the Gate design for portals. One point in and One point out. This does not scale well. This is why there are a limited number of Asura Gates in GW2, which provide Point to Point travel. And why there are a limited number of Airship stations and Ferries in FFXIV. But once you have a Waypoint or Aetherite Crystal travel system in your game, then this does scale. These provide only end points, of course, the starting point is wherever your character is at the time. So these is inherently a Many to Many Point travel system which does scale.

To travel in a Many to Many system, the map is used or in the case of FFXIV the map or a special dialog with a list of places you’ve been, and boom, you go to any place on the map or the list where you have opened a waypoint / crystal. These Many to Many travel systems scale as the world scales and folks play the game instead of wasting time traveling.

Blizzard could have announced a New Technological Break Through with this new patch that would allow instant travel throughout the world to any flight point you had already visited – after all they have WayPoints, they just call them Flight Points. They don’t have to make new ones, just use the ones they have. And of course these Flight Points already have the Faction Issue baked in.

But Noooooo.. .They knew the player base would be pissed off with this new change and rather than making a change that would scale with new changes to their world, they decided to piss folks off. Nobody is talking about Vanilla or Classic here. This is the modern game not the old one that no one wants to change. But the Classic world is not getting any larger either, so it does not have a scaling problem. It’s the new world that has travel scaling issues. And all other MMOs have solved the travel scaling issue from the beginning. Blizzard keeps hanging on to an old out-dated solution that other MMOs have solved.

What’s next for Blizzard? Remove Meeting Stones at the entrance to dungeons and Raids? What other travel downgrades can we think of, rather than travel upgrades? Want to waste more player’s time playing this game when they are already complaining about lack of interesting content and a dozen interesting things? Let’s make Wow more time consuming to play by removing portals.

It seems like the wrong time to be fighting with your player base. Folks are moving out of Wow in record numbers for lots of other reasons. Way to shoot yourselves in the feet, Blizzard. There are lots of other choices out there. I moved on a year and a half ago. I regularly play two other games that are constantly making an effort to keep their players happy. 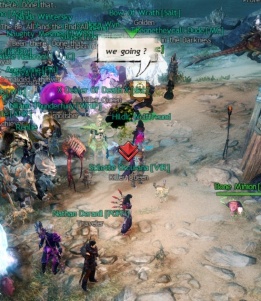 Here’s an example of what you can’t do with your mind stuck in the mud of slow travel in an MMO. In GW2, each day there is a game wide list of 4 Daily Activities to take part in for special rewards. It normally takes about 20 – 30 minutes to do 3 of the 4 Dailies to get the reward for the group. One of the Dailies is always to participate in events in one of the various maps of the game. Here we are gathering at a way point, with a commander, to perform a Bounty in a map of the new Path of Fire expansion. These Bounty events occur randomly through out the set of dozens of maps of the game.

Notice how many folks have gathered? This is like a 100 or more person raid. The player with the Red Mark – see right picture – is the commander who is selecting the Bounty from the Bounty board from the many choices. And when she selects the Bounty we will all follow. The point is that we all were able to gather there when we decided, it only took a few seconds for us to get there when we each decided to do this portion of the dailies. No advanced preperation required. We just show up. The commander marks herself and we can see her from anywhere in the map and join her for the fight. One commander might lead a few bounties and then drop her sign and another commander, seeing no other commander in the map, will raise her sign and lead a bounty. This only works with near instant travel across the MMO world.

Instead of taking new ideas like this from other games and innovating, Blizzard is wasting time and energy with dumbing down old ideas like the non-scaling Point to Point portal travel. Energy Wasted with fighting with your players is Energy not used Innovating in your game.