I’m sick of not having lighting for my Alienware Area-51 and Alienware Aurora cases. They work part of the time but can’t be easily controlled. The lighting is Proprietary and out of date. Alienware and later DELL made no effort to support the lighting with Windows 10 or Linux. These are what the two cases look like with lighting on:

That is the Area 51 circa 2006 with blue lighting in the vents and Alien Heads on sides and front. The Front Alien head is the power button.

And that’s the Alien Aurora R2 in Blue and Red lighting. The Front Alien Head opens the access door for the media drives. The power button is a hidden button behind the head on the top of the case.

Neither of these systems’ lighting works. I’ve replaced the internals with more modern systems and while the lighting boards were left intact and connected, they do not work. For a while they worked with the last settings that were stored in them, but Windows has changed to do something on the USB bus that prevents the devices from working. During boot, for example, the Aurora lighting flashes blue, but as soon as the system comes up, the lighting goes out. I assume because Windows 10 resets the USB bus in some way causing the lighting board to go out. Alienware / Dell shows no interest in keeping the lighting working on these old cases, even though the power supplies and cases are fine for future systems. The only downside is that they are bulky and heavy compared with modern cases.

But I have finally gotten fed up with no solution and after a quick search of Amazon I came up with these parts and will try to retro fit the lighting. First with the Area 51 and later with the Aurora. 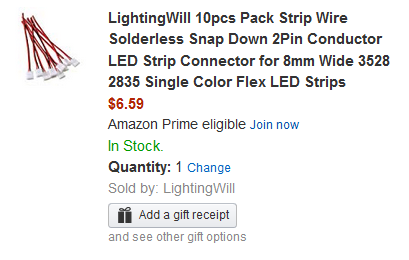 For about $14 there is a LED Strip RGB controller and power supply with remote. And for a few $$ more there are connectors to allow routing the strips only where they are required in the case. Of course the entire 16 foot strip of LEDs will not be needed, but that’s ok. They are easy to cut and connect together using the connectors that are already in the case for the old lighting. The only thing I’m not wild about is the extra power supply. But I probably can eliminate that with a connector to the PC power supply to pick up 12 volts from a hard drive power cable or something. We’ll see.

Foooy on you Alienware / DELL for not supporting lighting on these lovely old cases.
:ww

Update: 2 Feb 2019 Woopsy. Got the wrong connectors for the LEDs and need to power this from the power supply of the PC too. Here are some other parts I’ve ordered to do that:

The other connectors were for Single Color rather than RGB LEDs. RGB LEDs require four wires – two for power and two for signalling of the color and pattern. Using the 12 volt power supply would be clunky inside the computer, so the SATA cable extensions and barrel connectors will provide a cable to draw 12 volt power from a spare SATA cable on the power supply. Seems like a lot of cables, but there are two – or maybe three – alienware cases to convert to this scheme if it works.

Actually, the SMAD RGB connectors are not actually needed. Hookup wire could have been soldered directly to the ends of the LED strips. If things are too tight inside the case this may be the way to go anyway. The solder connections can be insulated with a hot glue gun. The end of the RGB strip might be insulated just to be safe in any event.

One of the key questions to be answered is whether the RGB lighting strips can be used in “Parallel” or a Wye configuration rather than one long string. It is going to be much more convenient, and aesthetic as well, to wire them this way. A bench test will confirm that the strips and controller will work this way before tearing into the case to install the strips. I’ll post video of this test when the parts arrive.

Change of plan. I’ve decided to convert the Aurora case first since the lights of the Area-51 case came back on, for some unknown reason. Also the Area-51 case has fewer lights and 15 feet of RGB strip will be a bit much for just three alien heads and a little lighting under the front of the case. More posts as this project progresses.

Update: 3 Feb 2019 Sigh. The lights on the Aurora just came on when booted this morning. No freaking idea what is going on.

Ever since we had a long power outage a few weeks ago, the lights have been off, with the alien head throbbing dull orange. The lights briefly have blinked on as it’s been booted, but then turned off when windows starts. Now they are staying on, with the last settings – static blue – which I quite like anyway. Who knows how long this will last.