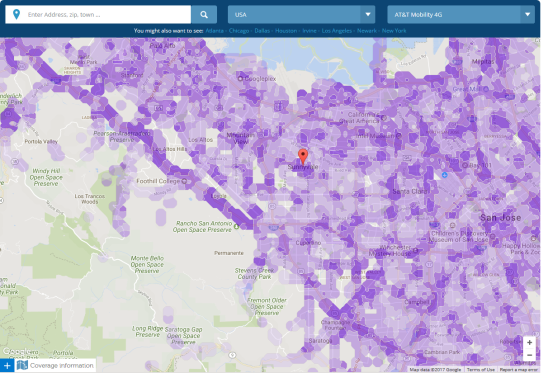 These are crowd-sourced coverage maps for AT&T 4G from Sensorly. Does this look like a utility to you? To me, this looks like the Provider has decided that coverage is important on main roads, and not in residences or minor roads. So don’t get stuck or have an Emergency on anything except a major road. Don’t use your mobile phone from home, use it from your business.

What if the electrical grid or land line phone service was done this way? What does this say about folks – an increasing majority of us – who only have a cell phone and no land line?

Before we go further we should mention that there are two aspects of “Being a Utility” that we should consider.

Here are some maps from the Crowd-Sourced mapping site called OpenSignal.

I’m sure we can agree that Electric Power and Land Line Phone services are Utilities in this country. What does this mean?

1 – Every home and business has access to Electrical Power. The power company cannot deny access based on who or where you are. You may have to pay extra for running a line to your remote rural property, or on your own ranch from your property line to your actual home across your land, but once you do, you have access at the same rates as every one else.

Land Line phone companies are regulated in the US as a Utility. There are many regulations including a regulation called “Title 1” which is part of the Communications Act of 1934.

1 – This means that all phones call all other phones. While there may be more than one Phone Company, there is only one Phone Network and they are required to work together.

2 – All phone devices, which meet some published standards, may be connected to the phone network and will operate properly as intended. See Hush-A-Phone case of 1956. The phone companies are not allowed to regulate which devices you may connect to their network.

3 – Everyone can have phone coverage at their residences and there are special provisions for Seniors who need emergency access and are provided service at lower rates.

Do the above maps look like Utility Service to you? Do you have Mobile Phone Coverage at your home? If you do, you are lucky. You may have only CDMA – old style coverage – rather than the newer 3G or 4G coverage and services which provide internet services.

Apparently, since it costs more money for towers and electrical power, the Mobile Phone carriers have opted to cover main roads and businesses and not rural roads and residential areas. Odd that we only get mobile phone services where we are not supposed to use it? In our cars?

Now for Net Neutrality. This is the principle of “Access to Connections” as applied to Internet coverage. And in this case, since modern Mobile phones are internet devices, it applies to phones as well as “land line” internet providers.

What is Net Neutrality?

Net neutrality is the principle that Internet service providers must treat all data on the Internet the same, and not discriminate or charge differently by user, content, website, platform, application, type of attached equipment, or method of communication.[1] For instance, under these principles, internet service providers are unable to intentionally block, slow down or charge money for specific websites and online content.

As we have seen, Power Companies and Land Line Phone companies, many of which are also among the very few Mobile Phone providers left in this country, are regulated to provide “Net Neutrality” as it relates to their Utilities.

Isn’t it time for the Internet to be regulated like a Utility?

Isn’t it time that we regulate how an internet or mobile phone service provider can behave, even if they do own a movie studio? Many of the major providers own movie studios now and AT&T is trying to merge with Time-Warner. The Justice Department has just sued to block this merger.

Here in the US, we are about to lose what little we have left of our expectations that Mobile Phones and Internet Services are Utilities.

Forbes has a recent article.

You can sign up to have your voice heard here.

If we can’t fix coverage, at least we can fix access.