GW2 Is Not Fun and FFXIV Is Fun

GW2 is great fun, but I don’t like playing it.
FFXIV can be boring at times, but I love playing it. 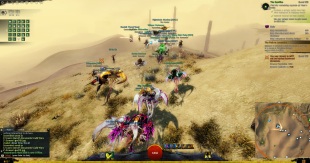 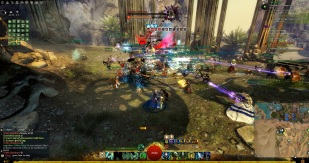 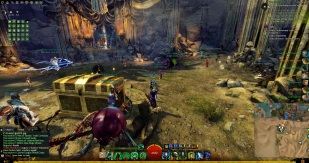 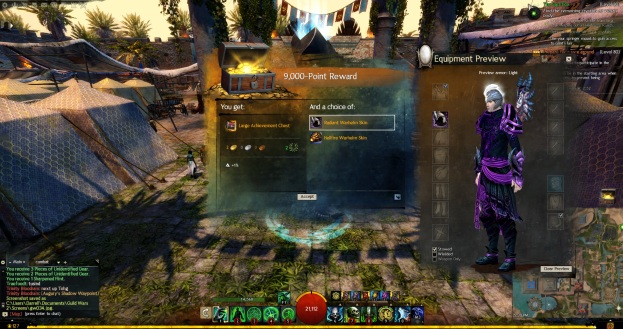 Here’s a large group of folks in the Crystal Desert doing bounties and me crossing the 9000 mark in Achievement Points. Yeah for me. Great Fun. I love it. And I hate it.

Early in my MMO experiences I played a lot of GW1 and was looking forward to GW2 when it came out. As an early player, I suffered through the early teething pains and grew to love it. I quickly made many alts of all professions and races and played through to the end of the core game, and cleared the map on most of my characters. Loved it.
But then came Living World Season 1. I played some of this. Most noteably I climbed the Tower of Nightmares in Kessex Hills. But alas I was doing other things and missed the war that Scarlet made on Lion’s Arch. But I did come back and see the devestation over the next couple of years until it was rebuilt.

The core game areas are all solo-able by a level 80 character with “Exotic Gear” which can easily be crafted by you and your alts for all the classes. Exotic gear is only 5% less powerful than the much more difficult to craft Legendary or Ascended gear. There are tons of attractive armor skins that can be earned through dungeon tokens or purchased with Karma or Gold. All my alts have attractive cultural or dungeon skins over crafted exotic armor.

I love rocking and rolling with large groups of folks, sometimes 50 or more, doing open world events. BUT