I’ve had a Marantz NR1504 for a couple of years at least. As you can see, it was released in 2013 and is no longer made – according to Marantz Tech Support.

My Marantz NR1504 Receiver recently took an update over the internet. Automatically. And the next time my Linux Mint System booted, the receiver refused to pass video from the Linux system. Dish Hopper and Sony Bluray player work fine. I thought the problem was the Linux Kernel Update that I’d done, so I pulled the machine out of the Entertainment system and attached another monitor to it thinking that I would need to re-install Linux Mint 18.2, but it came up fine with the other monitor. Also, I’ve swapped HDMI cable and used other Receiver input ports, and when the Linux system is attached directly to the Vizio Pseries TV, it works fine, in FREAKING 4K no less. Of course the NR1504 only supports HD, not 4K. In 4K the print is so small on my 65″ TV that I can barely see it. But it works fine and Youtube is also fine. 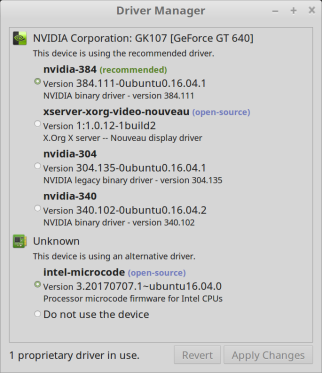 I called Marantz technical support and after the obligatory cable, input port checks, they confirmed that the recent Marantz Receiver update that I’d noticed a few days ago, changed HDMI negotiation and they suggested that I purchase an “HDMI Restorer”. I asked for a manufacturer and model number for an HDMI Restorer that they recommend and they could not provide me with any suggestions. I suggested that they do more testing with their updates and that my system was working fine and would be working fine if I had not plugged it into the internet.

Also he started telling me that they don’t support “PC”s attached to their devices. I pointed out to him that HDMI standards are HDMI standards and it doesn’t matter where it comes from, and also pointed out that the video card works fine with my TV. “Yes, but that’s a TV.”

So I have several questions at this point:

(1) The Linux System video card is an older model – obviously recent enough to run 4K video, and running the latest drivers – see above. A new video card that will fit in this compact system is about $140.

Should I upgrade the video card? Is that likely to fix the problem? Were there changes to the HDMI Protocol in the past three years that this receiver, or other ones I purchase, are likely to be finicky about? Have there been security updates that make things more stringent and would cause older systems to fail? But remember, the brand new – much newer than receiver – works fine with the Linux system. So that seems odd.

(2) What the heck is a HDMI restorer? Is that a cheaper solution? This sounds very dodgy and what’s the likely hood that whatever the HDMI Restorer protocol fixes are will be valid for the next Receiver Update? This is clearly not a signal integrity problem. The replacement 25ft HDMI cable carries the 4K signal just fine to the TV, and both the 6ft and 25ft HDMI cables fail in the same way to the Receiver. It seems clear that it’s a HDMI Protocol Issue.

(3) Should I just update the receiver to support 4K and the latest HDR [High Dynamic Range] standards, since the TV is to all the latest standards already. What do we recommend for that? Is there a receiver manufacturer that does not hand folks nonsense about “We don’t attached PCs”?

What would I purchase a Receiver from someone else with a 30 day return policy? And then leave it unplugged from the internet so it can’t take an update that will kill it in the future. Anybody know a smart Receiver company that understands they are making “Network Attached Computers” and not dumb tube receivers? I’m not knocking those who want to hear the warm rich sound of a tube receiver, but I’m in the market for a receiver with the latest HDMI switcher built in.